Start a Wiki
Akamaru is a Meso-Titan whose appearance is that of a snake-man, similar to that of Venomaster.

Akamaru is an Incan snake spirit, known to throw himself completely into battle with no regard for his own safety. SAS-076

DeFoe used an Akamaru to keep an unnamed green bug-like Titan of his in line and prevent it from growing rebellious. SAS-140

Akamaru is armed with a sleek dagger to stab his enemies. He can use his Poison Cloud ability to sacrifice himself but disorientate his enemies allowing his side to get away. SAS-076 He can also use a large staff to keep other Titans in line. SAS-140

Click here to view the full Gallery for Akamaru 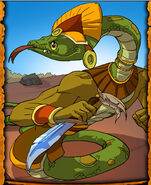 Akamaru
Add a photo to this gallery

Retrieved from "https://huntik.fandom.com/wiki/Akamaru?oldid=80182"
Community content is available under CC-BY-SA unless otherwise noted.