Ammit Heart-Eater is a Hecto-Titan that resembles a blue-skinned crocodile, dressed in golden armor and a teal robe. Her sharp teeth make her a fearsome Titan and is thus often called upon by members of the Organization in battle.

In ancient history, Ammit Heart-Eater inspired the Egyptian mythology surrounding Ammit, a crocodile goddess that devoured the hearts of people whose hearts were heavier than the Feather Of Truth in the afterlife. She instilled a heightened fear of the Nile crocodiles that would attack Egyptians and their boats. Huntik.com

Ammit Heart-Eater later became one of the more powerful Titans owned by the Organization. Their Amulets were given to many of the high-ranking Suits, including an archaeologist working for Klaus. At a dig for the lost Tomb of Nefertiti, Ammit was invoked to attack Dante Vale's team but was defeated by Caliban. S1E14 The Titan again was invoked within the tomb. It was fought Icarus and Caliban before being stunned by a double Touchram from Zhalia Moon and Dante. S1E15

In Klaus' bookshop, Klaus invoked his Ammit Heart-Eater to attack Dante Vale but was tussled by Metagolem. After Klaus's Nighlurker attacked Metagolem, Ammit was able to defeat him with a tail swipe. It then fought Lok Lambert's Freelancer before being defeated. S1E16

One of Rassimov's Suits invoked Ammit Heart-Eater in an alleyway in Paris, France where it fought alongside Jokoul against both Lok and Dante's Freelancers. Another Ammit Heart-Eater was later defeated by the traps in the Mausoleum of Sir Lancelot. S1E18

This Suit later summoned Ammit Heart-Eater in King Solomon's mines where it was defeated by Dante's Caliban. S1E23

Ammit was invoked by one of Rassimov's Suits in Turkey alongside Bonelasher but both were swiftly defeated by Lok's Lindorm. S1E19

This Suit later invoked Ammit Heart-Eater down in Atlantis. S1E21

One Amulet was also present in the arsenal of Rassimov, and he treated her like a pet and would not hesitate to summon her to fight against the Huntik Foundation. TCG:SAS-025

Rassimov summoned Ammit Heart-Eater against Dante Vale on the bridge of the Professor's castle. She was knocked off the bridge by Caliban and left unconscious before waking up and delaying Lok, Sophie and Zhalia from joining Dante. S1E25

Ammit was later unbonded from Rassimov by Dante's Sorrowbond and locked away in a box with his other Titans and taken back to the Huntik Foundation. S2E47

One of Klaus' Suits attempted to invoke Ammit Heart-Eater against Harrison Fears outside the Tomb of Nefertiti but he was completely ensnared by Rassimov's Thornment. S2E47

Ammit can bite and crush her enemies with her razor sharp teeth and powerful jaws as well as use her hefty tail to smash enemies. She can easily destroy a car  OAL-050 and has been shown to be strong enough to hold her own in a tussle with the powerful Metagolem before defeating him with assistance. S1E15 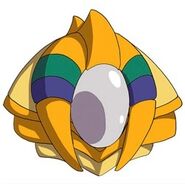 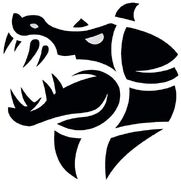 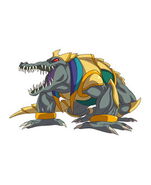 Ammit Heart-Eater
Add a photo to this gallery

Retrieved from "https://huntik.fandom.com/wiki/Ammit_Heart-Eater?oldid=90562"
Community content is available under CC-BY-SA unless otherwise noted.