Antedeluvian is a vampiric Draco-Titan twisted by his master, Vlad Tepes, also known as Dracula. The Titan and Seeker pair planted the seeds of the Transylvanian Dracula myths. From his massive, bat-like wings to his pale blue skin, enormous strength, and energy-draining bite, Antedeluvian is perhaps the one creature more terrifying than the mythological vampire which he inspired.

Antedeluvian previously belonged to Vlad Tepes, a very evil Seeker. The Huntik team deduced that Vlad may have put a spell on his Titans to keep them invoked. S1E17

Years later, Antedeluvian attacked Lok Lambert, Sophie Casterwill and Cherit while they ventured through the Castle of Vlad Dracul. After defeating Icarus, Antedeluvian pursued the trio but in vain as they escaped through an alcove. S1E17

After some time, Antedeluvian became a more wild and uncontrollable with the Foundation Agents stationed at Vlad's Castle struggling to subdue him. Metz asked Lok, having experience with controlling wild Titans like Lindorm, to see if he could subdue him and lead the mission Vampire Hunter. However, unbeknownst to them, the Blood Spiral had taken an interest in the Heart of Vlad Dracul and Harrison Fears had already bonded with Antedeluvian, who then became Powerbonded. S2E43

Harrison later invoked Powerbonded Antedeluvian whilst Tantras embarked on a ritual to obtain the power of Vlad Dracul which almost devastating consequences for the Huntik team. Having grown considerably in strength, Antedeluvian defeated Powerbonded Lindorm in one hit before gaining his ability. With his power further intensified from two Marauder Titans through Harrison's Bloodrank, he then went on to overpower Powerbonded Sabriel and Kaioh the Tracker and fought against Powerbonded Sorcerel. When Dante Vale arrived with Ignatius, Antedeluvian was defeated by the pair with Dante using his new Copykind power to utilize Ignatius' Burn ability. S2E43

Fighting against Antedeluvian is like fighting against a vampire of legend. He can use his Power Drain ability to drain energy from ally or enemy Titans and use it to become more powerful. Thanks to his Flight ability, he can dodge attacks with great agility. Antedeluvian also has the ability to transform into mist for escape or for ambush thanks to his Vaporeal ability. S1E17 He is also incredibly strong like the vampires of legend. All of this makes this fearsome Titan a very dangerous opponent.

Upon Powerbonding, Antedeluvian gains golden armor, taloned wings, a flexible blade and bat-like mask. Like other Powerbonded Titans his size increased; from being equal in height to Icarus, to being larger than Powerbonded Sabriel and Kaioh. His original Power Drain ability has been strengthened into Energy Drain which allows Powerbonded Antedeluvian to gain the energy and abilities of enemy Titans that he hits. S2E43 His other abilities include:

Antedeluvian was based upon the classic features of legendary vampires down to his menacing eyes. He was given bat-like wings due to numerous legends about vampires turning into bats and vice-versa. Based upon Vlad Tepes, the historical nobleman who inspired Bram Stroker's Dracula, Antedeluvian was given a sword and armor. Huntik.com 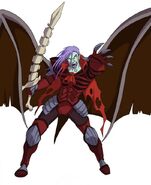 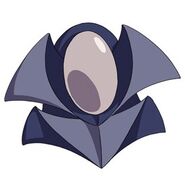 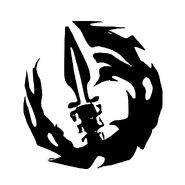 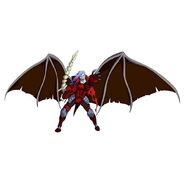 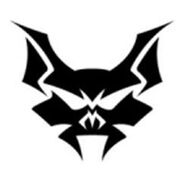 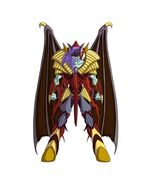