Archwarder resembles a plant with a giant, wilted, bloomed flower and three strong roots as legs. It is the ultimate defense against the Legendary Titans, as this plant-based Titan is able to counter even the Legendary Titans' unique abilities and to level the playing field for Archwarder's Seeker.

Archwarder's Amulet was first given to Rassimov by the Professor. Then in a fight between the Professor, Dante, and Lok Lambert, Rassimov used Archwarder to disrupt Tao and Behemoth, making them impossible to invoke. S1E24 When the team raided the Professor's castle, Rassimov pretended to lose in combat against Dante Vale so that the Amulet of Archwarder could be picked up by Dante. S1E25

In line with Rassimov's intentions, Archwarder was then used by Dante against Overlos to allow the Puppeteer ability of Dendras to overpower the Professor's control of the Titan of Immortality. These actions led to the defeat of the Professor as well as a weakening in the influence and power of the Organization. S1E26

During a later battle in Klaus' laboratory upon the discovery of the Amulet of the Nullifier, Void, Dante used Archwarder to disrupt the Blood Spiral Titan Shakrit. However, the newly-returned Rassimov callously used Darkvoid to destroy Archwarder and his Amulet. S2E32

Archwarder has an attack power of 3 and a defense power of 3. LGS-094. His Disruption Pulse ability makes opposing Seekers lose control of high powered Titans. The more powerful the opposing Titan, the more susceptible it is to the ability. This ability is manifested as an energy wave emitting in all directions. When the energy comes into contact with the Amulet of a Titan, the Titan surges with energy causing its Seeker to lose more control over it the longer the effects last. S1E26 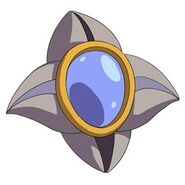 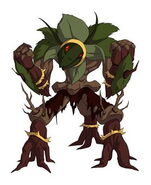