Balenpyre is a large, golem-like Litho-Titan possessing a single, large eye on its demon-horned head. Its body is composed of rock and lava. Balenpyre's Amulet is in the possession of Kiel.

Balenpyre was invoked by Kiel to fight against Dante Vale. Balenpyre and Dante's Elf King Oberon were evenly matched as Balenpyre's fist and Oberon's sword collided. Both Titans were sent back to their Amulets. S2E38

Balenpyre again was invoked alongside Vulcana during the Blood Spiral assault on the Fortress of Iron Will. The Titan trapped Sophie Casterwill in a flame ring, but she was freed when Sorcerel became Powerbonded and used her Armor Force ability to protect against the triple assault. Balenpyre was defeated when Sophie managed to face her fears and invoke the Legendary Titan of Valor, Mythras, to defeat Balenpyre.  S2E40

Balenpyre is able to create fire and to use it as a weapon. Its mastery over fire is evident in its ability to create powerful fire balls, breathe fire, and even create entire rings of fire. Due to his large size, Balenpyre also possesses great strength. Due to his body being covered in flames, physical contact with an enemy Titan such as a punch can also burn the opponent in addition to the damage caused by Balenpyre's own offensive powers. 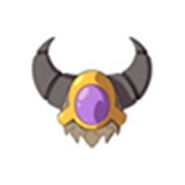 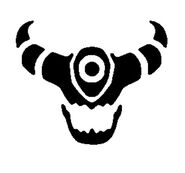 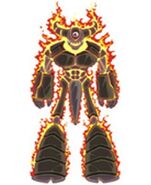 Balenpyre
Add a photo to this gallery

Retrieved from "https://huntik.fandom.com/wiki/Balenpyre?oldid=93182"
Community content is available under CC-BY-SA unless otherwise noted.