Start a Wiki
Bazela's Hive is a grotesque, insectoid Swara-Titan that possesses five large, red eyes. From its tail, it is able to summon a swarm of smaller Bazela's Insect Titans. Bazela's Hive was one of most powerful Titans of the Blood Spiral Seeker, Tantras, and was passed on to Harrison Fears before falling into the hands of the Betrayer.

Tantras invoked Bazela's Hive right before the Blood Spiral attack on the Fortress of Iron Will, releasing hundreds of Insect fliers to carry the Silent Soldiers and Casterwill Hunters into battle. After scanning Bazela's Hive on the Holotome from afar, Dante Vale determined a plan to take out the mother Titan. After taking out twenty Silent Soldiers single-handedly, Dante defeated Bazela's Hive with help from Zhalia Moon S2E40

After losing all his power to the Heart of Vlad Dracul, Tantras gave Bazela's Hive's Amulet to Harrison along with Jericho. Harrison later used the Insect flyers to take him and Rassimov to the Tomb of Nefertiti and later the Tomb of Tutankhamun. S2E47

Later, during the final confrontation between Den and and Harrison, Den knocked Bazela's Hive's Amulet out of Harrison's hand to prevent the Titan from being summoned. The Amulet fell to the throne of the Betrayer, who took the Amulet and invoked Bazela's Hive to spawn myriads of Fliers to provide his forces with a means of flight and prevent the Huntik Foundation's aircraft from approaching the Spiral Mark. S2E51

For what Bazela's Hive lacks in attack strength, it makes up for in defensive power. Instead of attacking directly, Bazela's Hive is used for its Spawn Insect Fliers ability which uses its tail to create smaller Bazela's Insect Titans. These Bazela's Insects may then be used as aggressive flying mounts for members of the Blood Spiral.

Click here to view the full Gallery for Bazela's Hive 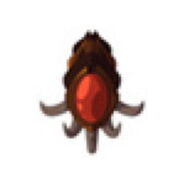 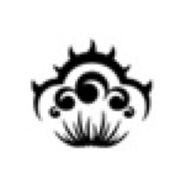 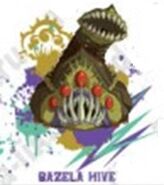 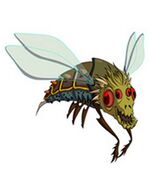 Bazela's Insect
Add a photo to this gallery

Retrieved from "https://huntik.fandom.com/wiki/Bazela%27s_Hive?oldid=78352"
Community content is available under CC-BY-SA unless otherwise noted.