Behemoth, the Legendary Titan of Body, wields more pure physical strength than any other Titan commonly known to Seekers. The one-ton stone globe that Behemoth carries on his back is used as both a weapon and to intimidate his enemies.

Behemoth was one of the three Legendary Titans utilized by Lord Casterwill when the Titans were first summoned to Earth to fight against the Nullifiers. Due to lack of information, Behemoth's early past is still shrouded in mystery other than the fact that Casterwill left Behemoth's Ring sealed in an unknown location.

Years later, Metz tracked down Behemoth with the hope of using its power to cure his friend Simon Judeau, who had been cursed by disturbing the Ring of Araknos. On finding the Titan's resting place, Metz, too, was cursed for removing Behemoth from its tomb without the Amulet of Will. Afterwards, the Ring was kept by his wife, the leader of a tribe of Amazon warriors. S1E19

During the Huntik team's search for the Legendary Titans, Zhalia Moon claimed Behemoth's Ring as her prize for defeating Hippolyta, who had recently inherited the leadership of the Amazons. As Rassimov's men were closing in, Zhalia tossed Behemoth's Ring to Dante Vale. As Lord Casterwill's curse only affected the first person to disturb the Ring, Behemoth bonded with Dante and allowed Dante to invoke him. Dante then used the Titan and its great strength to defeat multiple Organization opponents with a single swipe. S1E19

Upon reaching Atlantis, Behemoth was invoked by Dante as a last-ditch effort during the mermen's Test of Skill. As the three mermen, through Casterwill family magic, were capable of invoking one equivalent Titan each to those invoked by Dante, he summoned a Legendary Titan. When the mermen attempted to invoke an equivalent Titan, the power backfired as Legendary Titans are unique and have no counterparts. S1E21

Behemoth can create earthquakes and swipe enemies with its enormous hands to crush opponent. He can also use the incredible globe on his back as a weapon. Behemoth can also step on smaller enemy Titans. S1E26 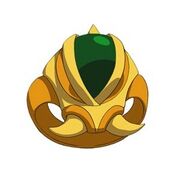 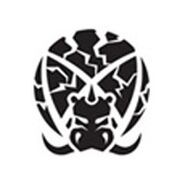 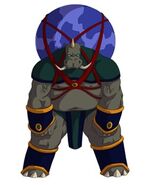