Billie is a pretty Seeker on the Huntik Foundation who reports to Nasher. She works undercover at the Salon Museum in Salon, France, alongside Peter and Annette.

Billie gave tickets for the Salon Museum to Wilder and his men when the Organization managed to locate the tower of Nostradamus. She then looked through the files of the Organization and found some information on Hoffman. Later, Billie and Peter tried to stop Wilder and his men, with her summoning Melee Artist She was able to take out Stack only to be defeated by Wilder, Hoffman, and some Suits. She, Peter amd Annette were taken hostage but were later were rescued by Dante Vale and his team. S2E28

On the longest night of the year, Billie took part in the attack on the Spiral Mark and the Betrayer and fought against a Silent Soldier. Though she was overpowered, she was assisted by Nasher. S2E51

Little is known about her abilities, as she is known to be capable of invoking the Titan, Melee Artist, and use basic spells such as Raypulse. Despite being a member of the Huntik Foundation, she does not appear to be a particularly powerful Seeker. She is capable of speaking both French and English and has mastered both accents. 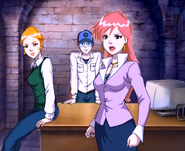 Billie with Annette and Peter 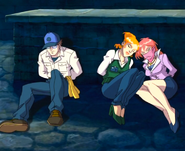 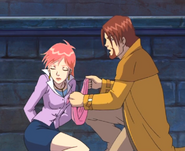 Add a photo to this gallery
Retrieved from "https://huntik.fandom.com/wiki/Billie?oldid=91005"
Community content is available under CC-BY-SA unless otherwise noted.