Black Scarabese is a Hecto-Titan closely related to the Gold Scarabese. These small beetle Titans might seem harmless at first, but they are used in the field to gather intelligence. Together with Gold Scarabese, they can form the powerful Anubian.

In the dreamworld created by Arc, the Legendary Titan of Fate, Sophie Casterwill encountered Spiral Demon, a hybrid of the Marauder Titan and lower body of the Black Scarabese. S2E34

The Black Scarabese were unbonded from Rassimov by Dante's Sorrowbond power and recovered by the Huntik Foundation. Dante told Lady S. and the other Huntik Foundation operatives that the Scarabese has to kept separate from each other. S2E47

These small beetle Titans might seem harmless at first, but the harm they inflict is not physical, it's informational. While the black-colored Scarabese stalk their Seeker's enemy, the Seeker can place the Golden Scarabese over his or her eye to see whatever the swarm of spy beetles sees. From there, setting up an ambush is child's play. Huntik.com 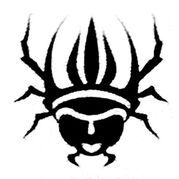