Bonelasher is similar to Redcap, the favored Titan of low-level Organization Suits, but he is a bit stronger and harder to control. With the same aggression and passion for combat as his Titan cousin, Bonelasher is best unleashed by his Seeker in the midst of a battle. With his army of razor-sharp claws and teeth, Bonelasher is best fought at distance.

Bonelasher was first used by Klaus's suits alongside Enforcer. One fought Caliban but was defeated. Later on, two defeated Lok Lambert's Freelancer but were then taken out by Kilthane and Gybolg. S1E13

Bonelasher was used by Wilder's Suits, alongside Venomaster and Gigadrone Titans, to pursue the Huntik team. One was defeated by being squashed under a tree levered by Dante Vale's Dragonfist power. S2E30

Bonelasher can do massive amounts of damage with his fists. He is capable of punching through walls and Titans easily. He can stand amounts of damage most other Titans can't. With his razor-sharp claws and teeth, Bonelasher is best fought at a distance. Though Bonelasher is usually used with an Enforcer in battle, most of these Titans are preferred to be used independently. 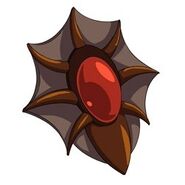 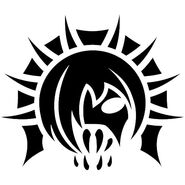 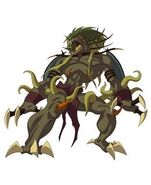