Breaker is one of the most powerful Titans in the Organization. He is a massive, four-armed bear with ancient, tribal markings on his body. Even a single moment of distraction can prove deadly against this traditional fighting Titan. He fights furiously for his master, Grier.

Breaker has some tie to Native American tribes, as referenced to on the tribal markings on his arms, the feathers, and the style of his armor. Native Americans had great respect for the animal spirits, including the bear. Legends about bears being incredibly good at wrestling come from Breaker Titans' ability to Grapple. Huntik.com Breaker is also closely related to the Breaker Cub Titan. OAL-053

Later a Breaker amulet would come into the hands of the Organization operative, Grier, who would use him in numerous battles against the Huntik Foundation.

Grier invoked Breaker in the Huntik Foundation library in Venice to attack Dante Vale's Caliban. To give Dante, Lok Lambert, Sophie Casterwill and Santiago time to escape, Caliban through a large shelf on top of Breaker. S1E02

In the attic of Jodis Lore, Grier invoked Breaker to again fight against Dante's Caliban. With help from DeFoe's Kreutalk, Breaker was able to defeat Caliban before defeating Zhalia Moon's Kilthane. After being distracted by Solwing, Breaker charged at Sophie only to be disorientated by a Boltflare from Zhalia. When Dante succeeded in invoking Lore's Titan, Metagolem, Breaker was defeated by a single hit from Metagolem. S1E03

In the Cavern of the Gargoyle, Breaker fought against the Huntik team's Titans, including Caliban, Kilthane and Lok's Freelancer. Despite gaining the upper hand against the Titans, Breaker was defeated Caliban after being held back by Metagolem. S1E04 Breaker was later invoked by Grier in the Paris Catacombs to fight Caliban who punched him to the ground. After recovering Breaker attacked Dante's Freelancer before being buried in rocks by Dante's Raypulse. S1E06

Grier invoked Breaker in the Basilisk House to fight Kilthane. After an attack from Sabriel, Breaker and Grier pursued Sophie and Zhalia alongside another Suit and their Mindrone. Later, Grier used Breaker to fight and defeat Caliban. Breaker was defeated however when Zhalia bonded with King Basilisk who turned Breaker to stone. S1E09

In Greece, Grier invoked Breaker as part of DeFoe's plan to ambush the Huntik team and kill Dante. He fought against Zhalia's Kilthane while Dante and his team fled to the shipwreck thtat they had uncovered. S1E10

When Grier and his Suits took control of Sutos Island, Breaker was invoked to scare any inhabitant who challenged the Organization's rule. Breaker was later used to fight Metagolem and Caliban while Grier and Dante fought one on one. Later, Breaker was again invoked alongside Megataur as Grier and Dante prepared to fight to the end. However, the battle was stopped when Grier revealed he had come to restore order and peace to Sutos after his father, Zan-Sutos, was killed by a mob. With the two Seekers having resolved their differences, Grier allowed Dante and his team to leave. S1E12

Breaker became Powerbonded to Grier during a battle in the Professor's castle in order to save him from asphyxiation at the hands Wilder's Grand Facade, much to the amazement of Den Fears. Powerbonded Breaker then defeated Grand Facade with his Crushing Grip. S2E46

Breaker is incredibly strong, and even more so when grappling opponents. His Grapple ability increases his strength to the point that he can even neutralize even more powerful opponents like Caliban. Using his four arms, he pins his opponent to his chest and beats his opponent mercilessly. And his claws and teeth are certainly no picnic either. Once he's got his opponent, it is almost certainly done for. Being a bear, he also has a keen sense of smell.

After becoming Powerbonded, Breaker gained the typical golden armor of a Powerbonded Titan with the large horns protruding his back also becoming gold in color. His Grapple power became enhanced to the Crushing Grip ability giving even him stronger physical strength, allowing him to quickly take out powerful Titans like Grand Facade. S2E46

Breaker was designed to represent the power of a wild beast and so was modeled after a four-armed bear. Taking inspiration from the Native Americans, who associated bears with strength and a connection with the Earth, Breaker was given tribal markings, feathers, and tribal armor. Huntik.com 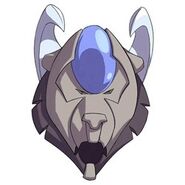 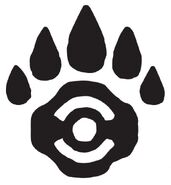 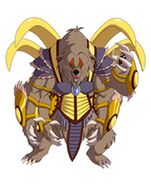