Beginning with Lord Casterwill and his four children, the Casterwill lineage has been devoted to fighting the Nullifiers and preventing their return to earth at the hands of the Betrayer and his Blood Spiral. S2E50

After a fire set by Kiel in the Paris Casterwill house, Sophie Casterwill thought herself to be the sole surviving member of the Casterwill lineage.

Following the quatrains on Eathon's Holotome, Lok Lambert managed to retrieve the Legendary Titan of Summons, Quetzalcoatl. Transforming the Titan into the Blue Star, the remaining living members of the Casterwill family were signaled to come out of their hiding in order to unite against the returning Blood Spiral. S2E38

Sophie won leadership of the Casterwill family after succeeding in the test to awaken and bond to Mythras, the Legendary Titan of Bravery and defeating Kiel, S2E40

Houses of the Casterwill family

The House of Nobles was led by the parents of Lucas and Sophie Casterwill until they were murdered by Kiel through arson. Lucas became this House's new Elder. S2E39

The House of Blade Makers was led by its Elder, Nimue Casterwill, the Lady of the Lake, until her sacrifice to hold off the Blood Spirals who were trying to attack the Fortress of Iron Will. Afterwards, Vivian Casterwill inherited the leadership position. S2E40

The House of Knowledge is led by its Elder, Focauld Casterwill. S2E39

The House of Strategists is led by Teien Casterwill. S2E39

The Rue Guardian oversees his house and the curses that protect the secrets of the Casterwill family. S2E39

Other Members and Affiliates

Part of the Council of Elders 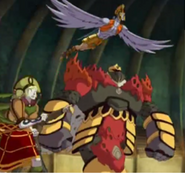 Feyone, Icarus, and Coralgolem
Casterwill family Titans
Add a photo to this gallery
Retrieved from "https://huntik.fandom.com/wiki/Casterwill_family?oldid=78421"
Community content is available under CC-BY-SA unless otherwise noted.