Cathy Lambert is the older sister of Lok Lambert and the daughter of both Sandra Lambert and Eathon Lambert. Unlike the rest of her family, she has no Seeker powers or knowledge of the Huntik Foundation.

Cathy was born in County Kerry, Ireland where she grew up in the Lambert house with her younger brother, Lok. S1E13

When the Huntik team arrived at the Lambert house for their vacation, Cathy was out at her summer class. On the way home, she helped Scarlet Byrne who was being followed by a group of Klaus' Suits. She hugged Lok before going upstair to telephone her friend. S1E13

When the Huntik team sought refuge at the Lambert house following their defeat at the hands of Rassimov, Cathy walked in and witnessed the team using their powers. Dante then took Cathy aside and used Simplemind to make her forget what she saw. LAter, Cathy mistakenly assumed that Sophie Casterwill was jealous of Scarlet's banter with Dante Vale. Sophie then tried to explain that Zhalia would have been the jealous one. S2E48

Cathy Lambert is a good student and a friend of Scarlet Byrne. Cathy seems to be a normal older sister for Lok, sometimes calling him pet names and teasing him, but she seems happy when she sees him after some time. The two siblings have a very friendly towards each other. Cathy is also very helpful, as she evinced when she consoled her depressed friend on the phone. S1E13 She quickly notices people's moods, as she saw that Sophie did not like when Scarlet was flirting with Dante. Cathy took this attitude for a sign that Sophie was jealous of Dante and tried to comfort her that he was not interested in Scarlett. Cathy was, however, oblivious to the feelings which Sophie displayed towards her brother. S2E48 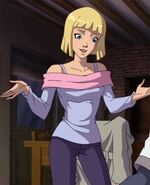 Add a photo to this gallery
Retrieved from "https://huntik.fandom.com/wiki/Cathy_Lambert?oldid=79472"
Community content is available under CC-BY-SA unless otherwise noted.