Harrison and Den fight but Zhalia breaks cover to save them both from a cave-in. The Casterwills and the Huntik team clash with the Blood Spirals as Lok and Sophie fight the Betrayer. Zhalia is hurt, trying to save them from the Betrayer's Titan, Demigorgan, but she is rescued by Den and Harrison together.

Den Fears, after a brief battle alongside his brother, is rejoined by Lok Lambert and Sophie Casterwill who are reunited with Zhalia Moon in the fight against the Betrayer and Demigorgan. Despite Lok bonding with Powerbonded Pendragon and summoning Quetzalcoatl, the Titan of Summons, the battle seems to be lost with the Betrayer continually being revived. Suddenly, Umbra arrives with a pile of ashes...

Den and Harrison try to work out their feeling for each other while taking on the Betrayer. Harrison evokes Jericho while Den evokes Dullahan. Dullahan and Jericho take on Demigorgan while Den and Harrison try to simultaneously attack the Betrayer with Raypulse. However the Betrayer disappears for awhile to reappear behind Zhalia. Den attacks Demigorgan at pointblank range with Boltflare while Jericho shields Harrrison from the Betrayer's Shocklash. Harrison sees an oppotunity to protect Zhalia with Stormshield but the Betrayer overpowers him. The Betrayer uses Shadowlock to seal Harrison in darkness. Den shouts "No!" for his brother while Demigorgan stomps Dullahan into the ground, returning it to its amulet. Den tries to run away from Demigorgan but is saved by Raijin the Thunderbolt's bolt.

As per the Gallery Policy, the full set of images for Dante's Return may be found at the Category Gallery.

United: Harrison and Den with Jericho and Dullahan 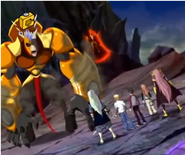 Demigorgan is faced by the Team

Demigorgan's copies of Raijin, Sabriel and Gareon prove to be deadly

Umbra after returning with Dante's ashes
Add a photo to this gallery
Retrieved from "https://huntik.fandom.com/wiki/Dante%27s_Return?oldid=79629"
Community content is available under CC-BY-SA unless otherwise noted.