Dante Vale, as the top operative of the Huntik Foundation, is an expert treasure hunter, sleuth, and martial artist. Originally acting as a hired detective, he took to leading the team of Lok Lambert, Sophie Casterwill, Zhalia Moon, and later Den Fears on a mission to track down the missing Foundation operative and father of Lok, Eathon Lambert and to retrieve the Legendary Titans. He has developed a close bond with his Titans, particularly his trusted Caliban and Solwing.

When he was young, Dante Vale met Metz, who recognized Dante's potential to be a Seeker. Through Metz' tutelage, Dante learned about magic and Titans. Dante's first Amulet to bond to, that of Solwing, was found all by himself while spending time in Turkey. S1E19 Dante was also given a Caliban Amulet by Metz, though Dante took over a year to be able to invoke and master the Meso-Titan due to Caliban's immense power. Initially, Dante was only able to keep Caliban summoned for about a minute, though Dante increased this time through training. Webisodes His friendship with Metz also found Dante working alongside Eathon Lambert and Simon Judeau. Huntik.com As a teenager, he trained intensively under Metz' friend Master Storm in China alongside Lin Storm, with whom he formed a close friendship. S2E43

Dante later gained an Ignatius Amulet while on an expedition to a volcano in Chile. As Ignatius Amulets were common in this country, both Dante and another Seeker acquired one during this expedition. Another Meso-Titan, Dante was able to control much faster after learning how to control Caliban, though Ignatius' flares occasionally would set something, such as buildings, on fire. Three water Titans were once needed to put Ignatius out. Webisodes

In his youth, Dante also crossed paths with Montehue, a student of the history of war and fellow treasure hunter, with the pair instantly forming a competitive but nonetheless friendly rivalry. Whilst racing up a mountain, Dante secretly slipped a Tolivane Amulet into Montehue's pocket as a way of keeping things fair. After saving Montehue from falling to his death, Dante left a lasting impression on him, and introducing him to the world of Seekers. The pair's competitive friendship spanned many years, with the pair eventually becoming close friends through working together to use Mjolnir to defeat Ymir in the Temple of Thor and, later, fighting side by side against the Professor in King Solomon's mines. S1E08 S1E23

During a mission to rescue Clements from the Ring of Arc, Dante entered a dreamworld, created by Arc, the Legendary Titan of Fate. Here, Dante had a vision of his own death with Zhalia and his friends crying at his grave. Despite being visibly haunted by this, he kept it to himself and told no one. S2E34 S2E43

Dante was left saddened when Zhalia chose to leave the Huntik team, adamant she play to her strengths and infiltrate the Blood Spiral to fight them from the inside. S2E35 Using Zhalia's Logosbook, the pair communicated with one another. S2E39

In the Vault of Hernán Cortés, Dante managed to beat Wilder in recovering the Ring of the Legendary Titan of Dimensions, Umbra, the Shadow Jaguar. S2E42

Deeply shaken by the vision of his future and with the threat of the Blood Spiral looming, Dante returned to train under Master Storm in China. After learning the Copykind spell, he used Umbra to join his team in the Castle of Vlad Dracul. Using Copykind to mimic Ignatius' flames, he caused the Heart of Vlad Dracul to overload and injure Tantras. S2E43

During the final battle at the Spiral Mark, Dante was able to defeat Rassimov one on one while helping Lok and Sophie destroy Legion. However, the Betrayer revealed that he had faked the last prophecies of Nostradamus, and in attempting to destroy the Mark, the team had activated it and sent the Red Comet hurtling towards Earth. Realizing the time had come to fulfill his destiny that Arc has revealed, Dante died sacrificing himself to prevent the Red Comet from hitting the Earth. S2E50

Attempting to destroy his enemies' will to fight, the Betrayer revealed Dante's death to Huntik Foundation and Casterwill family alliance, devastating Zhalia Moon, Metz and Montehue. However, Lok, enraged at the Spirals' mocking of Dante's sacrifice, made a motivating speech, inspiring the Foundation to finish what Dante started, knowing he would have believed they could win the war without him. S2E51

During the Betrayer's ritual, Dante's ashes were teleported back to Earth by Umbra. However, by using the Copykind spell on Phoenix, the Legendary Titan of the Rebirth, just prior to his death, Dante was able to rise back to life from his ashes. After the defeat of the Betrayer, Dante Vale became a member of the Huntik Foundation Council, leaving leadership of his old team to Lok Lambert. S2E52

A natural leader, Dante not only takes control of the situation but also knows how to be a present mentor to his team. Through his years of experience and natural intelligence, he is an excellent tactician, often keeping several steps ahead of his opponents in the Organization. Enjoying the battle, he often makes wisecracks when fighting. He manages to remain calm under stress and to adapt when unexpected events make his original plans not pan out. Fiercely loyal to his team, he will do anything in his power to protect his friends, such as trying to find a cure for Metz' curse. S1E09 As a result, he often sees the good in others before he sees the bad, such as being quick to forgive Zhalia for her betrayal of the team. This goodness, however, can also be his downfall, and even led to his falling for the Professor's deception and losing the Legendary Titans.

As a leader and mentor for Sophie and Lok, he teaches them how to be Seekers. At first, he seemed to be a pro who doesn't do anything without getting a right payment, but it turned out that Dante is a friendly, helpful man who easily puts his whole heart in discovering secrets that interest him. He got involved in search for Eathon Lambert just because it was his job, but his feelings changed due to the growing bond with his young students. He developed a crush on Zhalia Moon and, despite her betrayal of the team, is willing to risk his life to protect her or to bring her back to the right side. Though he knows she will handle every job she is asked to do, he also gets worried every time she is in danger. They make a good team on the missions, fitting each other's style of fighting and perceiving what the other one is going to do.

Dante is both a leader and tactician for his team, employing his intellect, experience, and knowledge of history to push his team forward. Having trained in both martial arts and the abilities of a Seeker, his combat style combines the two into a formidable force with either enhancing the other. Depending on the situation, he can use spells to augment his agility, enhance his martial arts, attack at a range, or provide shielding. He has a close bond with his Titans due to the time spent training together and can attack in perfect synch as with Powerbonded Caliban. 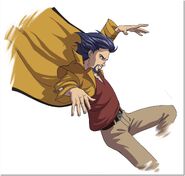 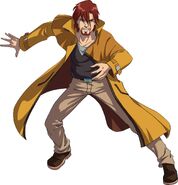 Dante in his ranger vest

Dante as a child with Solwing, his first Titan

Dante with the Amulet of Caliban