Darkvoid is a powerful spell that creates a black hole underneath the target and then absorbs and destroys all those taken into the void. Only the caster appears to be unaffected by this spell. Darkvoid can be used for items as small as a ball or as massive as a room. So far Rassimov is the only one that has used this spell.

Rassimov used this spell for the first time in rage to destroy Cavalier, because he wouldn't bond to him. He used for the second time to destroy Archwarder, but later when he tried to use it on the Titan, Maelstrom, the attack was absorbed. 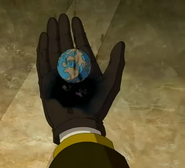 Darkvoid used against Archwarder
Add a photo to this gallery

This spell is similar to another Blood Spiral spell, called Abyssalfall, used by the Silent Soldiers. It creates a smaller hole that entraps the opponent, but the effect of Abyssalfall is less powerful and is slower to entrap the opponent.

Retrieved from "https://huntik.fandom.com/wiki/Darkvoid?oldid=36716"
Community content is available under CC-BY-SA unless otherwise noted.