Dellix is one of the members of Lucas Casterwill's team along with Lane. A loyal defender of the Casterwill family and skilled swordsman, Dellix won't hesitate to help his brothers and sisters in battle even if it means disobeying his superior.

Dellix was a guardian of the Casterwill Library in France along with Lane. S1E18

Dellix returned when Lucas Casterwill came out of hiding as part of Lucas' team. They launched an attack on the Huntik team at the Casterwill Library, overpowering them and ordering them to surrender. However, Zhalia Moon turned off her Thoughtspecter illusions to unveil her Titans and Dellix was stopped by Gar-Ghoul. Lucas then revealed himself to be the brother of Sophie Casterwill. Lucas' team soon revealed they were on a mission to find the Amulet of Void. S2E31

Before any action, Dellix often asks Lucas what he thinks and seeks his approval. However, when Lucas' decision doesn't match his own, he often manifests it and does what he believes is right. He is extremely loyal to the Casterwill family, calling them brothers and sisters. He can't stand the thought of them suffering and engages in battles to protect them. He is quite impulsive and lets his heart tell him what is right. It contrasts with Lucas' stark and prudent behavior. S2E40 He seems to be close to Lane, as they're often seen together.

Dellix is an excellent swordsman. It is unknown if he has an special powers or if his sword itself has a magical ability called "Light Edge". He has not used any other abilities.

As per the Gallery Policy, the full set of images for Dellix may be found at the Category Gallery. 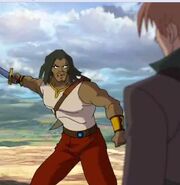