Diaz is an Organization commander. His second in command is his high-ranking Suit, Snake.

Diaz and his team fought the Huntik Foundation team while after the Amulet of Ghostfog. A big fight arose while on water but Ghostfog's amulet was recovered by Lok Lambert. Diaz's boat was destroyed by Ghostfog's ability, leaving him and his team floating in the water, swearing revenge on the Huntik team. HM#13

Diaz made his return, in a new beige suit, along with Snake and his team later in the series. After his team took Cherit hostage, Diaz ransomed Cherit, demanding that Dante give him Ghostfog. Although he received the Amulet, Cherit escaped and stole the Amulet from him. After a brief battle, Diaz's Blackbull was defeated and he was knocked out by Dante. HM#16

Diaz is a ruthless and determined, and not one to give up. His persistence in trying to recover Ghostfog by any means necessary showed him to be not easily phased.

Although Diaz's fighting skills were not enough to defeat Dante, Diaz was still a charismatic leader and tough enough to keep his men in check. 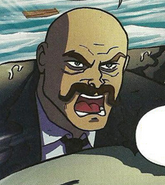 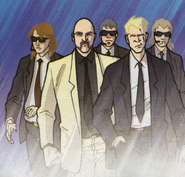 Diaz with Snake and his Suits

Diaz and his Suits use Clatterbang
Add a photo to this gallery
Retrieved from "https://huntik.fandom.com/wiki/Diaz?oldid=91133"
Community content is available under CC-BY-SA unless otherwise noted.