Start a Wiki
Doberman is a dog-like Titan in the possession of Hoffman. He dons an armor made of pure obsidian decorated with bronze adornments whilst wielding a long spear. Doberman is a strong fighter with pure energy sparkling in his eyes.

Doberman was summoned by Hoffman to defend the Professor's castle against the Dante Vale's Team. He fought alongside Eathon the dog's two Undergolem Titans against Lok Lambert's Powerbonded Baselaird and Grier's Megataur. He was hit by a lot of rocks before being defeated by Baselaird. S2E46.

Doberman can move extremely fast allowing him to run back and defend his Seeker if necessary. He can maneuver his spear with great skill and accuracy. His physical strength is a match for many of his foes. His thick suit of obsidian means he is able to withstand a vast number of attacks. S2E46

Click here to view the full Gallery for Doberman 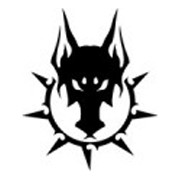 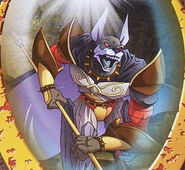 Doberman
Add a photo to this gallery

Retrieved from "https://huntik.fandom.com/wiki/Doberman?oldid=89999"
Community content is available under CC-BY-SA unless otherwise noted.