Start a Wiki
Dominator is one of the Professor's most powerful and choice Titans alongside Nordrake and Araknos. It is a fierce Titan with large, spiked fists and an ability that can revert a Titan to its unbonded archetype.

When the Professor, Rassimov, and a group of Suits arrived at the door to the Legendary Titan, Tao, the Professor, not wanting anything to go wrong thanks to his lackeys, invoked Dominator to ambush anyone to come near the Titan. The first two to appear while the Professor and his men were trying to open the door were two of his own Suits. Once Montehue, and later Dante Vale's team, arrived, Dominator fought against Montehue's Fenris and Zhalia's Kilthane. After Rassimov defeated Kilthane, Dominator attacked Sabriel, whose speed prevented her from being hit. Dominator was eventually sent back to its Amulet by Tao. S1E23

When the Professor later attempted to summon Overlos through a ritual involving Tao, Araknos, and Behemoth, Dominator assisted in killing Sabriel by using his Spikes special ability, forcing her to refuse to return to her amulet and to use her last powers to protect Sophie Casterwill. Sabriel and her Amulet began to crumble to pieces, and she was finished off by the Professor. S1E26

The apparent destruction of Sabriel later showed the power of Powerbonding to be able to even overcome the destruction of a Titan's Amulet when Powerbonded Sabriel was summoned from Sophie Casterwill's hand. S2E29

Equipped with a pair of spiked, wrecking-ball fists, and very strong muscles, Dominator packs a very swift direct strike that is more powerful than almost any Titan. His armor, tactics, and ferocious rage combine to make him a furious opponent. It's only his somewhat bulky shape that gives smaller Titans a chance, though that is still rarely enough to defeat Dominator as he is surprisingly fast.

His spikes can cause any Titan hit by them to act as their core archetypes and no longer listen to their own Seekers. This ability caused Fenris to rampage as he had before bonding to Montehue and was also key in the events leading to the initial 'killing' of Sabriel. 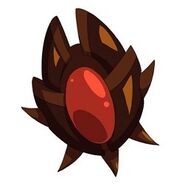 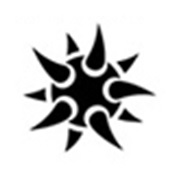 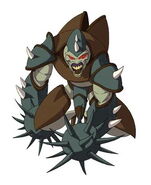 Dominator
Add a photo to this gallery

Retrieved from "https://huntik.fandom.com/wiki/Dominator?oldid=75790"
Community content is available under CC-BY-SA unless otherwise noted.