Doom Warden is a shadowy, reptilian Titan with green skin and blue armor. This burly Titan wields a giant key as its primary weapon. Doom Warden is used by members of the Organization.

This Titan was again used by the same female suit while defending the Professor's castle from Lok Lambert and Den Fears. Doom Warden was defeated by Lok with the Willblade. S2E46

Doom Warden is an extremely strong Titan that uses a large key to smash his enemies. Doom Warden's special ability is Magnetic Fluid. 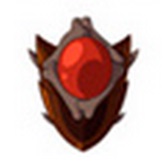 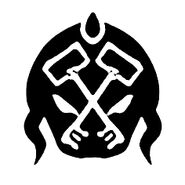 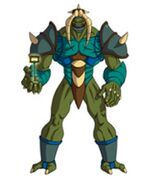 Doom Warden
Add a photo to this gallery

Retrieved from "https://huntik.fandom.com/wiki/Doom_Warden?oldid=67111"
Community content is available under CC-BY-SA unless otherwise noted.