Enfluxion is a Titan whose body is made up entirely of water. Unlike Undine, Enfluxion has a much more unearthly visage and possesses tendrils of water for arms. Her Amulet is in the possession of Sophie Casterwill after being given to her as a gift from Teien Casterwill.

Enfluxion was given to Sophie Casterwill by Teien Casterwill to help fight against Kiel and his fire-based Titans and spells. Sophie first invoked her outside the Temple of Sun in Mexico where she fought against Vulcana but was defeated.  S2E38

Sophie invoked Enfluxion in Cortés' Vault to defend Kaioh the Tracker from Shadow Agent and hold him in a state of flux. She was defeated after attempting to defeat the mighty Conquistador left to guard the vault. S2E42

During the battle between the Casterwill family, Blood Spiral and Huntik Foundation at the Blood Spiral Base, Sophie invoked Enfluxion to defend her and Lok Lambert from the entourage of Silent Soldiers. She was defeated however by the Betrayer's Titan,Demigorgan who had been posing as Eathon Lambert's Holotome. S2E51

Enfluxion has the ability to control water and change her shape. Her offensive attack is using her arms as water cannons while she can also create a wall of water to shield her and her allies, a defensive ability that was strong enough to protect Sophie Casterwill from Vulcana. S2E38 Enfluxion was also able to knock back a Shadow Agent and, for a short period of time, distract a Conquistador S2E42.

Enfluxion's initial design began as a Gaia-Titan composed of water with her arms being tendrils of water. Her rough sketch was drawn with curved lines to represent the flow of water. In order to help distinguish her from the similar design of Lunar's elemental form, Enfluxion was given legs that go past the knee and was sketched to more obviously be the actual body of the Titan. Lunar's elemental form, by contrast, is a humanoid aura surrounding a fairy-like Titan. Enfluxion's final art was given a transparent body to reflect her watery nature and was given a lighter cyan color to contrast Lunar's more purple and white color. Huntik.com Following her card release on SAS-053, Enfluxion was given the Amulet of a Krono-Titan instead of a Gaia-Titan as well as a new icon. 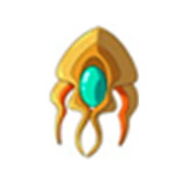 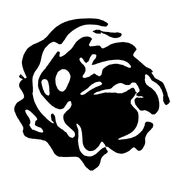 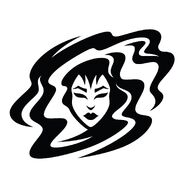 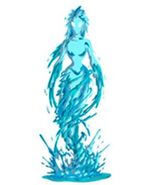