Enforcer is a flying, insectoid Swara-Titan possessing six arms. It has three red eyes for its face from which it can shoot laser beams. Enforcer is a weaker cousin of Mindrone and Terrapede, and is used by members of the Organization for ranged and aerial combat.

Enforcer Titans are standard issue amongst Klaus' team of Suits. S1E13 Three were summoned at once in the Tomb of Nefertiti in attempt to stop the Huntik team from escaping. S1E15

Rassimov's Suits were also equipped with the Titan. S1E21 Several Enforcers were used in the Ethiopian desert to attack the Huntik team. S1E22 Enforcer's lasers were later used to severely damage Dante's house in the Professor's organized attack on the Huntik team. S1E24

This Suit summoned her Enforcer to attack the Huntik team in a burger restaurant. It fought Santiago before facing off against LeBlanche's Sentinel. S1E14

Hoffman's Enforcer accompanied him, Wilder and his team as they travelled by speedboat to Avalon He was called back to his Amulet as they docked on the shore. S2E30

Enforcer has attack power similar to Strix but has increased defensive capabilities. These Titans can shoot lasers from one or more of its eyes, this lasers are strong enough to defeat weaker Titans such as Feyone. S1E23 and and weaken stronger ones like Freelancer. S1E17 Enforcer's claws are razor-sharp like axes however they aren't commonly used in battles. 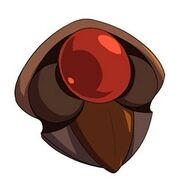 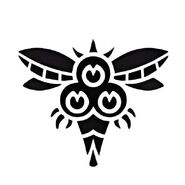 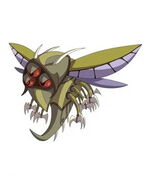 Enforcer
Add a photo to this gallery
Retrieved from "https://huntik.fandom.com/wiki/Enforcer?oldid=93068"
Community content is available under CC-BY-SA unless otherwise noted.