Executioner is a large Litho-Titan whose face is hidden behind a black executioner's mask. Executioner Titans have been seen in the possession of two Organization Seekers, Gregor and Lee Roy.

Gregor invoked Executioner to fight Dante Vale's Caliban. After some assistance from Elegast, he was able to defeat Sophie Casterwill's Sabriel. After the roof of the shrine collapsed, Executioner was the only Titan to survive the impact. He attempted to attack Lok Lambert but was, however, defeated by Arawn the Hunter, now under Lok's command. HC#02

Executioner was invoked by Gregor to fight Freelancer, Sabriel and Kilthane. He defeated the group of Titans but was overpowered by Metagolem. HC#04

Gregor's Executioner fought Freelancer and Sabriel again at the Carvival of Venice. HC#05

An Executioner was used by Lee Roy to fight Sabriel and Gareon. After defeating the pair, it attacked Ford's Frostanna and used her ice blast to defeat Dante's Ignatius. HC#15

Executioner is extremely powerful and able to defeat large groups of Titans using his hefty chains and hook. His size gives an advantage as well as his physical strength. 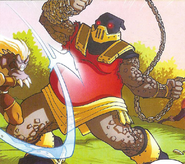 Excutioner's Amulet
Add a photo to this gallery
Retrieved from "https://huntik.fandom.com/wiki/Executioner?oldid=67436"
Community content is available under CC-BY-SA unless otherwise noted.