Fan Dancer is a mysterious Titan who hides her face behind a white mask and wears hair sticks to hold her blue hair. She wears red samurai armor into battle and is armed with razor-sharp war fans.

Fan Dancer Titans inspired the Japanese martial art of tessenjutsu based on her use of razor-sharp fans as weapons, much like Gheisha. Unlike Kabuki, Fan Dancer Titans fell into the hands of evil Seekers. SAS-030

Fan Dancer fights with her sharp war fans and with her agility. She is skilled in the martial art of tessenjutsu. SAS-030

Fan Dancer was designed as a fast-attacking, female samurai who fights with tessen war fans. She was given detailed samurai armor. To prevent her from looking too much like a human, she was given glowing red eyes, and her face was hidden behind a mask. Huntik.com 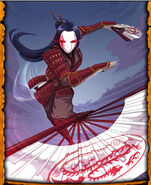 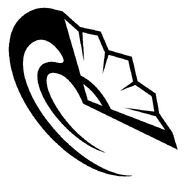