Ferryman is a white, jackal-like Hecto-Titan. Ferryman wears bandages and orange, Egyptian-style clothing. This Titan serves as a means of transportation between Earth and the Spirit World.

Ferryman, along with Anubian, inspired Egyptian mythology of the god, Anubis. Anubis was said to be a jackal-headed god who watched over the afterlife due to Ferryman's appearance and abilities.

Ferryman is able to travel between Earth and Huntik, the Spirit world of the Titans. He is capable of escorting beings to and from the afterlife. Though his own strength may be low, he is able to bring in reinforcements for battle.

Ferryman was designed as a doglike Titan wearing Egyptian raiment. He was given makeup around his eyes similar to that worn by ancient Egyptians for protection against the sun. His final design was given orange clothing. To contrast Kopesh, Ferryman was given bone-white skin. Huntik.com 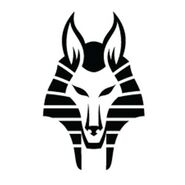