Fire Kappa is a turtle-like Yama-Titan who dons a magical fire that blazes from the top of his head. Though the water kappa of Japanese myths can be either helpful or cruel, most Fire Kappa are friendly.

Though the water kappa of Japanese myths can be either helpful or cruel, most Fire Kappa are friendly. Huntik.com

Although Fire Kappa lacks direct combat skills, with his durable armored shell, Fire Kappa can withstand a number of attacks and specializes in defending its Seeker. Huntik.com He gets his strength from the bowl of fire on top of its head. SAS-056

This turtle-like Titan has a hard shell, a sharp beak, and a head that looks like it has a bowl of liquid fire on it. Fire Kappa looks pretty cranky. Of course, if you always had fire coming out of your head, you’d probably be in a bad mood all the time too! We didn’t have any suggestions for the artist; this is exactly the look we wanted.

The pencil sketch gives us a little more detail on the Fire Kappa, particularly his shell and face. You can see that it’s not his head that’s on fire, but there’s actually something weird about the shape of his head, and the fire is coming out of that. We’re ready to see the color version!

Now that’s a fire! Fire Kappa is a little pudgy and has skinny legs, so he’s not the best fighter in the world, but his armored shell means he can take a couple of good hits. The bright flame on his head tends to distract enemies in combat, so they tend to bonk him first whenever he’s around, but he knows he’s a protector Titan. Huntik.com 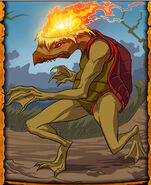