Focauld Casterwill is an elder of the Casterwill family. As the Elder of Knowledge, he lives in the Cloisters in New York where he maintained a Casterwill base. An unyielding traditionalist, Focauld can at first come across as stubborn and arrogant but he deeply cares for his family's preservation.

As the Keeper of Knowledge, Focauld resided in the Cloisters in New York, guarding the ancient tomes of the Casterwill family that details the hidden hiding places of the scattered family members. S2E37

After the Blood Spiral found Focauld's location, he used the power Knowledgelock to seal the tomes' info into a single Cypherdex Crystal. After alerting Teien Casterwill of his situation, he held off against Kiel, Marduk and the Casterwill Hunters before being joined and rescued by Sophie Casterwill and her Huntik Foundation team. However, he stubbornly refused to welcome her into the family's secrets. S2E37

Outside the Cloisters, Focauld witnessed the Blue Star of Quetzalcoatl, activated by Lok Lambert, signalling the Casterwill family to come out of hiding. S2E38

After joining his family in the Fortress of Iron Will, Focauld, like Lucas Casterwill, voted against Sophie's demands to fight the Blood Spiral and instead ensure the preservation of the Casterwills by hiding and surviving. S2E39 After Sophie returned from the Trial of Courage with Mythras, the Titan of Valor, Focauld was still opposed to fighting the Spirals. During the Spiral army's attack on Iron Will, Focauld remained inside and helped the 5 Rue Guardians in activating the Fortress' defenses and summoning the Coralgolem, Feyone and Icarus Titans. Following their victory and the death of Nimue, Focauld told Sophie that she had given him something to believe in again. S2E40

During the final battle against the Betrayer at the Blood Spiral Base, Focuald travelled in a Scramjet with the other Casterwills. S2E40 Focauld was seen elated at the defeat of the Betrayer. S2E52

Focauld is an old man who often acts in a lofty and somewhat arrogant manner. He seems disgruntled when someone points out his age, though he often uses his long experience as one of the arguments in discussions. He had little faith in young people, thinking that they often make mistakes and know nothing about life and as such, can be rude to them, like he was to Sophie and Lok when they first met. S2E37 However, he eventually warmed up to them, after they proved themselves. Despite his age, Focauld is quite fit. His main priority was taking care of the Casterwill inheritance. He would do anything to protect it, even surrendering from a fight not to let the Casterwill knowledge become damaged. After witnessing Sophie's bravery and fighting spirit, the previously disillusioned Focauld found something to believe in again and a new confidence to fight the Blood Spiral. S2E40 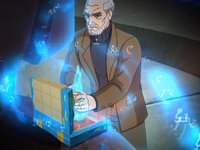 Focauld is a very smart man and is able to use an arsenal of spells to powerful effect. S2E37 Although he does not appear to possess any Amulets, Focauld was able to help the Rue Guardians activate the defenses of the Fortress of Iron Will and invoke several Casterwill Titans. S2E40