Forest Queen Diana is the favored Titan of Hippolyta, the ruler of the hidden Amazonian tribe who worship Diana as a goddess.

Diana is worshipped by the Amazons as the goddess of the hunt and nature. A lone statue is situated outside the Amazon temple where they must pour water over her head and thus her arms would then aim her arrows to the sky. After taking an interest in her statue, Lok Lambert and Cherit discovered that the statue in fact had a complex interior design of clockwork mechanisms. S1E19 Diana was invoked by Hippolyta to defend her tribe from Rassimov's Suits, who had been sent to retrieve the Ring of Behemoth, the Legendary Titan of Body. She shot and defeated Sekhmet with by firing a pair of arrows. However, one of the Suits invoked a Nighlurker Titan who used its Shadow Ambush ability to disappear into the shadows before emerging and biting Diana's leg, thus sending her back to her Amulet. S1E19

Forest Queen Diana has a myriad of nature based spells, and is unmatchable with a bow, being able to fire numerous arrows at once. In addition to her ranged capabilities, she also carries a dagger for melee. She is also fast due to having the body of a horse as well as the upper body of a woman. 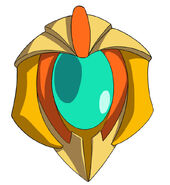 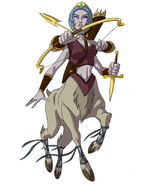