Gar-Ghoul is a powerful and fearsome Titan and was the basis for the gargoyle statues and legends of France. As Gar-Ghoul could strike fear into other evil creatures, statues imitating Gar-Ghoul were built and placed on many French buildings to ward off evil spirits.

Called the Garguile by the French people, the Gar-Ghoul terrorized France until it was sealed in stone and placed upon Notredame to act as a guardian against evil spirits. Other similar statues were built thereafter for the same purpose.

DeFoe later found Gar-Ghoul's Amulet in the Cavern of the Gargoyle and used it in battle against Dante Vale's Caliban, after a long battle Gar-Ghoul was defeated and sent back to its Amulet. S1E04.

DeFoe used Gar-Ghoul to fight against Dante's Caliban once more, but Gar-Ghoul still could not beat Caliban in battle. S1E05

Gar-Ghoul was used by DeFoe alongside Kreutalk at King Basilisk's resting place to take out Sabriel and Freelancer although Gar-Ghoul overpowered the two Titans it was called back by DeFoe once Zhalia Moon retrieved King Basilisk's Amulet and threatened to turn him to stone. S1E09

Inside one of the Argonaut's ship, DeFoe summoned Gar-Ghoul alongside Mindrone. Gar-Ghoul fought against Dante and his Solwing Titan but was defeated by Dante who used Dragonfist to knock Gar-Ghoul into a hole in the ship. S1E10

After DeFoe was removed from the Organization, Zhalia Moon took ownership of Gar-Ghoul, although she did not reveal this action until the final battle against the Professor. It brought Nordrake out of the air, and distracted Tao for a while until being defeated alongside Ariel. Later Zhalia again would use this Titan against the Organazation. S1E26.

Zhalia invoked Gar-Ghoul to fight alongside Dante's Elf King Oberon against Wilder and his team. Gar-Ghoul was defeated by Myrmidon after being hit by a Weakenshade spell cast by Wilder. S2E27

Some argue that the fear Gar-Ghoul instills is alone enough to win a battle. He has the ability to manipulate water, drawing water from the air into his throat and projecting it as an extremely high-pressure blast of water from his mouth is his signature attack which could even knock Nordrake out of the air. Gar-Ghoul's special ability of Aggression makes him so fierce that when he is the one to initiate a fight he cannot be defeated, he may not be the one to win in a battle but he certainly cannot be beaten easily. And his teeth, claws and powerful tail are also not to be taken lightly, and he was a perfect match for his old master, DeFoe, as well as his new Seeker, Zhalia. 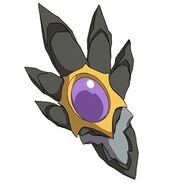 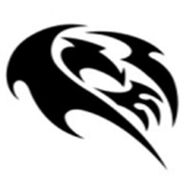 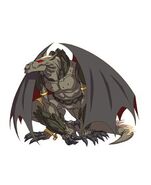