Gareon is a lizard-like Titan that can stick to walls like a gecko and whose camouflage abilities far surpass those of a chameleon. Due to his ability to become invisible, Gareon is regularly used to cross enemy lines and report back with valuable information. Gareon Amulets are in the possession of a number of Seekers, including Zhalia Moon and Suits of the Organization.

One of the Suits of the Organization bonded to and used a Gareon Titan. Adventure Game

Zhalia Moon received Gareon as her first Titan after being adopted by the Organization's scientist, Klaus. S1E17 Training for years alongside her Titan, they developed a bond much tighter than most Seekers ever have with their Titans. Huntik.com Her Gareon even behaved like a pet cat when she was feeling down.

Gareon helped to defeat a Redcap in the Prague Huntik Hotel, when Zhalia came to the rescue of Dante Vale, Lok Lambert and Sophie Casterwill from some Suits. Gareon was later invoked by Zhalia alongside Kilthane in the attic of Jodis Lore. After turning invisible, Gareon was sneak behind Grier and stun him with his eye beams. S1E03

Zhalia invoked Gareon whilst rescuing Peter from a pair of police officers in Paris. Turning invisible, Gareon was able to stun the policemen while Zhalia and Peter made their mistake. Gareon was later invoked to fight in the Cavern of the Gargoyle against the Organization forces. S1E04

Gareon played a vital role in getting the Ring of Arc to Clements at the Cathedral of Notre Dame, using his invisibility to sneak past the Organization forces spread throughout the Paris Catacombs. He was later seen being held by Zhalia at the safehouse following the team's mission. S1E06

In Iceland, Zhalia and Gareon attempted to slow Ymir down by blasting him in the face. S1E07 Gareon was later used in the Temple of Thor to hold back the Guardians of Thor. S1E08

Zhalia used Gareon in the Basilisk House where he surprised Lok and Sophie. His Amulet was later taken by DeFoe and left in a bag when Zhalia, Sophie and Lok were ambushed and taken prisoner. After Zhalia freed herself, Gareon took Defoe's bag and gave it to Lok and Sophie, enabling them to invoke Freelancer and Sabriel against the Organization. S1E09

Gareon was used when Zhalia fought against Grier in the hull of the shipwreck, but was defeated by his Dragonfist power. S1E10 On Madea Island, an illusion of Gareon was invoked against Zhalia alongside Kilthane and Strix by an image of a young Zhalia, created by the Titan Madea. Garion attacked Lok's Freelancer but was defeated. S1E11

Gareon was used to attack one Klaus's men in the Tomb of Nefertiti while the Huntik team tried to escape with the Sceptre of Nefertiti. S1E15 Gareon was later used to attack Sophie in the Castle of Vlad Dracul after Zhalia betrayed the team to Klaus. His attacks were defended by Sophie's Honorguard. S1E17

Gareon was seen comforting Zhalia in her apartment as she pondered over how she could make up for betraying Dante and his team. S1E19

Gareon was used to attack two of Rassimov's Suits in King Solomon's Mines. After stunning one Suit, he was hit by an Augerfrost before running away. S1E23

Zhalia invoked Gareon to fight against Sophie in The Professor's castle when the two came into conflict over Dante's decision to give the Professor the Rings of Behemoth and Tao. After defeating Icarus, Gareon was sent back to his Amulet by Sabriel. S1E25 Gareon later fought alongside Hoplite against two Undergolem Titans summoned by Eathon the dog but both were defeated. S1E26

Following the defeat of the Professor, Gareon was used to take out two Suits during the team's attack on Organization Central. Gareon was later used in Peru to defeat a Mindrone summoned by the forces of Wilder. S2E27

Zhalia summoned Gareon in the Crystal Caves where he fought alongside Dante's Caliban and Lok's Lindorm against White's Palamedes and Mallory's Pellinore. After a fierce battle, Gareon was defeated by Palamedes. S2E29

On the island of Medusa, Gareon assisted Zhalia in tracking down Stack and the Blood Spiral Seeker Kiel. Zhalia pondered to Gareon over infiltrating the cave before leaving while Gareon returned to his Amulet. S2E35

When Zhalia was caught infiltrating the Blood Spiral by Tantras, Gareon Powerbonded with her. Using his Scramblemind ability, the two erased Tantras' memory of her being a double-agent. S2E39

Powerbonded Gareon again was invoked during the confrontation against the Betrayer and Demigorgan when Zhalia rejoined her team. Using his Camouflage ability, Gareon managed to sneak through the battle and land a direct attack to Demigorgan. However, Demigorgan used its abilities to summon a copy of Zhalia to confuse and subvert the Rapport-Bond. The copy of Zhalia then transformed itself into the Titan before it was defeated by Powerbonded Pendragon. Gareon rejoined Zhalia and the others and later assisted Lucas Casterwill and Sandra Lambert in their attack on the Betrayer. However, after dodging multiple attacks, Gareon was defeated by the Betrayer's ability to use the Spiral Mark to revive himself. S2E52

Gareon's Limited Invisibility ability allows him to camouflage himself as his scales can warp light around him. This ability permits Gareon to infiltrate enemy lines; however, attacking renders this invisibility null. Huntik.com Gareon Titans also can cling to surfaces and move along the walls of building or caves like a gecko. S1E03 Gareon can surround themselves with a magical aura that allows them to float in place. S1E08 Gareon is able to attack with laser blasts from his eyes and mouth. Huntik.comHis teeth and claws can be used for direct combat as Gareon has a habit of chewing up anything that gets near his mouth. Huntik.com

After forming a tight bond with his Seeker, Gareon grew significantly in size and became equipped with armor covering his chest and a reptilian frill around his head. His eyes too changed from yellow to red. S2E39 His speed and manoeuvrability has increased and his eye blasts are now significantly more powerful. S2E52 His new Powerbonded abilities include:

Gareon was designed as a small, lizard-like Titan with the camouflage abilities of a chameleon. Originally, he was designed to be more humanoid, but was made more animal-like to add variety to the Titans. He was given spots on his back and arms to mimic the camouflage of real animals. His final design was given sharp teeth and claws for a fierce appearance. Huntik.com 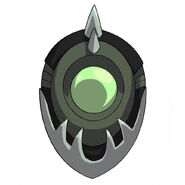 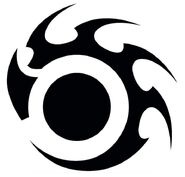 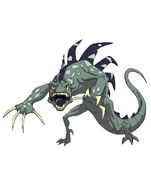 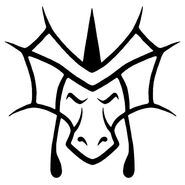 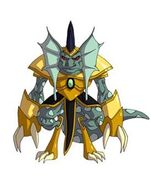