Gawain is a green-skinned and green-haired Gaia-Titan with antler-like tree limbs growing from his head. His armor is made out of wood and green leaves. Gawain was once the primary Titan of the legendary King Arthur.

Gawain's Amulet was used by King Arthur as his main Titan. This bond was so close that King Arthur's nephew, Sir Gawain, was named after the Titan. After being passed down through many generations of knightly Seekers, Gawain was later lost within one of England's rivers. Over time, this river became polluted, causing Gawain to become sick and corrupted. Huntik.com

Gawain can wield his shield, javelin, and hammer in battle, covering both his offensive and defensive needs. 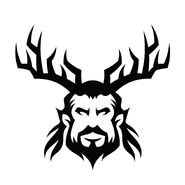 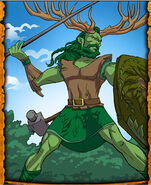