Start a Wiki
Gheisha is a Yama-Titan who has the appearance of a traditional Gheisha entertainer. Much like the Titan Fan Dancer, she fights with a pair of Japanese war fans. Her Amulet was in the possession of Bonnie, a minion of Professor Rickman.

Gheisha was invoked by Bonnie in the underwater city of Ys alongside Celina's Red Vampress. She fought and defeated Dante Vale's Ignatius. However the tables turned when Zhalia Moon arrived and Gheisha was defeated by Caliban. Her Seeker, Bonnie, was then arrested by the Huntik Foundation. HC#12

Gheisha is quick and agile. Much like the Titan Fan Dancer, she is skilled in tessenjutsu, using a pair of war fans from which she can fire lethal blades attached to strings with which she can ensnare enemy Titans.

Click here to view the full Gallery for Gheisha 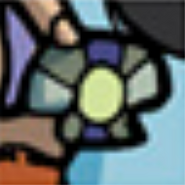 Gheisha
Add a photo to this gallery

Retrieved from "https://huntik.fandom.com/wiki/Gheisha?oldid=78883"
Community content is available under CC-BY-SA unless otherwise noted.