Ghostfog is a Gaia-Titan made up of fog and smoke, that originally resided on the ghost ship, Flying Dutchman.

Ghostfog's Amulet was found on the Flying Dutchman when Lok Lambert and Sophie Casterwill searched for it. Upon bonding with the Titan, Lok used Ghostfog to destroy Diaz, whose team were also intent on recovering it, and Snake's boat. HC#13

Diaz and his Organization team later returned, determined to recapture Ghostfog's Amulet. After taking Cherit hostage, they forced Dante Vale into handing over the Amulet but it was then recovered by Cherit. HC#16

Ghostfog is capable of acting as a rushing tornado or a whirl of cascading winds, destroying everything in its path. It can grow to large sizes as it is made up of fog. 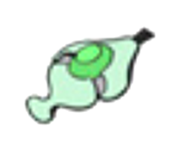 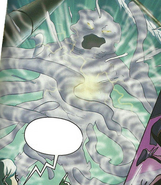 Ghostfog
Add a photo to this gallery

Retrieved from "https://huntik.fandom.com/wiki/Ghostfog?oldid=78814"
Community content is available under CC-BY-SA unless otherwise noted.