Gleipnir was a magical rope that, due to its magical nature, could not be broken through any means.

Thor used this rope to bind the wild Titan, Fenris.

Dante Vale, Sophie Casterwill, Cherit, Lok Lambert, and Zhalia Moon later found the rope wrapped around a statue in a chamber located within the Temple of Thor and utilize it to bind Fenris because he could not be defeated otherwise due to the magic of the temple. Because of its magical nature, they could not untie it without the help of Lok's Springer. The rope was then used to bind Fenris and send him back to his Amulet. S1E08 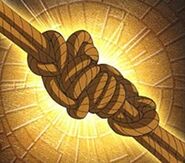 Add a photo to this gallery
Retrieved from "https://huntik.fandom.com/wiki/Gleipnir?oldid=77475"
Community content is available under CC-BY-SA unless otherwise noted.