The Golem's Attic is a building located on the Road of Alchemists in Prague, Czech Republic, in which Jodis Lore was assumed to have lived. The door was protected with magic so that only Jodis Lore's Key could open the door. Inside, he kept his notes on the Amulet of Will and his Metagolem amulet hidden S1E03. It was later converted into a safehouse by the Organization where they stored information on artifacts in their archive terminal. Lok Lambert, Sophie Casterwill and Cherit broke in here looking for info on the location of Void but were discovered and captured by Wilder and his Suits. S2E31

The golem lying on the floor 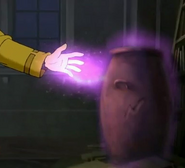 The hiding place for the Metagolem amulet

The attic as an Organization safehouse
Add a photo to this gallery
Retrieved from "https://huntik.fandom.com/wiki/Golem%27s_Attic?oldid=75397"
Community content is available under CC-BY-SA unless otherwise noted.