Grier, born Prince Zan-Grier of Sutos Island, served as DeFoe’s right hand man. Rarely speaking, he presented himself an ordinary thug, but he carries himself with a subtle nobility with his loyalty. Grier once believed that with the Organization’s domination, there would come universal order to keep all people in line and prevent wars. After taking his rightful place as the prince of Sutos, he later went on to seize the reins of the Organization from Wilder.

Though few were aware, Grier was raised on the secret Seeker island-nation of Sutos, where his father, Zan-Sutos, ruled as leader. His family had led the people of this nation to an orderly, happy existence for many years. After his father's death, Grier moved on to the Organization to do his part to bring order to the world using his Seeker skills. With many battles and defeats at the hands of Dante's team, DeFoe lost the favor of the Organization and Grier was chosen to replace him only after he got rid of DeFoe. Grier soon returns to his home and restores order to the island torn apart by war, thereafter being recognized as the new ruler. S1E12

After the defeat of the Professor, Dante Vale and his team returned to Sutos Island to ask for help from Grier. His men were attacked by the Blood Spiral Brotherhood. Grier guided the team through the Professor's castle in order to find the dossier about Rassimov. Grier later helped Lok Lambert and Den Fears defeat Wilder in the Professor's room. As a result of this, he captured Wilder and took over the Organization. S2E46

At first glance, Grier comes off as a robotic yes-man, just another arm of his commander DeFoe, but under his seemingly blind loyalty is a much more complex, likable man. He is an idealist as well as a loyalist, always committed to bringing order to a chaotic world. Behind his strong loyalty beats a heart of honor that desires to bring peace to Sutos Island. In many ways Grier could be considered the ideal ruler.

Grier and the Huntik Foundation Seeker, Dante Vale, had an interesting fighting relationship, as both recognized the other's fighting primarily for the good of mankind, though both had very different ideas of this good. Their conflicts were often resolved between their two gargantuan Titans: Dante's Metagolem and Grier's signature Titan, the bear-brawler, Breaker.

Grier is a powerful Seeker, able to fight on equal ground with Dante Vale. In combat, Grier uses magic that makes him faster and much stronger than any normal human such as Dragonfist or Shadowspeed. With him fights Breaker, a mighty Titan that hits hard with a combination of strength and speed.

Click here to view the full Gallery for Grier 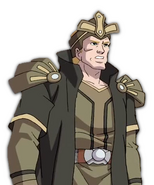 Add a photo to this gallery
Retrieved from "https://huntik.fandom.com/wiki/Grier?oldid=90000"
Community content is available under CC-BY-SA unless otherwise noted.