Guggenheim is a top operative of the Huntik Foundation. As a senior coordinator, he assigns missions to the Seekers such as Dante Vale, Lok Lambert and Sophie Casterwill. Guggenheim also answers their questions about the missions and what their objectives are.

Guggenheim's powers as a Seeker manifested when he was 8 years old. While at a summer camp in Germany, he and a group of boys were tasked with using their survival skills for a night in the woods. Though the group had managed to collect firewood, pitch a tent, and catch some rabbits for food, they were unable to start a fire. While the other boys went to the tent to plan, Guggenheim secretly used Boltflare to light the firewood. An American boy at the camp witnessed this, calling Guggenheim a German wizard, while another boy, Gunther Von Bulow, remarked that Guggenheim was actually from Switzerland. Huntik.com

With Metz, chairman of the Huntik Foundation being bedridden due to the Curse of the Legendary Titans, Guggenheim was responsible for coordinating numerous missions, including those of Dante Vale and his team. S1E04 S1E05 S1E07 S1E10 S1E14 S1E18

Guggenheim was present during the holographic Council meeting called by a bedridden Metz to congratulate them on their efforts against the Organization. S1E21

In an attempt to stop Dante from putting himself in danger, Guggenheim traveled to Dante Vale's house and argue against the team storming the Professor's castle. He boldly warned Dante he was prepared to fight him and invoked Bulreguard, but laughed it off and hugged him, wishing him luck. S1E25 Following the defeat of the Professor, Guggenheim was present at the surprise party for the team at Dante's house. S1E26

Guggenheim was present when Nasher alerted the Council after receiving an emergency call from his Agents in Salon Museum after they were taken prisoner by Wilder and his Organization team. S2E28

Guggenheim was shocked to hear a report from Dante Vale about the emergence of the Blood Spiral. S2E33

Guggenheim met with Lok Lambert, Den Fears and Sophie Casterwill in Hamelin, Germany where he informed of the strange goings on in Hamelin Cathedral. He later helped Lok fight the Gremlow Titans, invoking Bulreguard and using a variety of impressive powers to suppress them. S2E41

Guggenheim joined the Council on the longest night of the year to discuss plans to stop the activation of the Spiral Mark. S2E49 During the final battle at the Spiral Mark, he was upset to hear of Dante's death. However, motivated by Lok Lambert's speech, he helped Melee Artist defeat Marauder. S2E52

Following the defeat of The Betrayer, Guggenheim was seen with the council as they were joined by a new member, Dante Vale. S2E52

Guggenheim is very talented at research. He also seems to have a soft spot for flowers, as seen when he got interested in a plant on the market in Hamelin, and enjoys eating tasty food. He hasn't show much of his abilities, but he has to be skilled and intelligent, as he is a part of the Huntik Council.

A powerful Seeker in his youth, Guggenheim possesses a range of spells and, despite his age, is still a formidable presence in the battlefield. 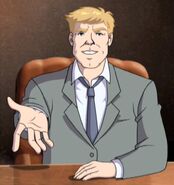 Guggenheim on the screen in Dante Vale's house assigning a mission

Retrieved from "https://huntik.fandom.com/wiki/Guggenheim?oldid=81497"
Community content is available under CC-BY-SA unless otherwise noted.