When both the Casterwill family and the Organization set their eyes on the Amulet of Void, Harlekin Titans were used when the Blood Spiral burst in to seize the Nullifier. When Dante Vale Powerbonded with Caliban, Harlekin tried to attack the newly empowered Titan but Powerbonded Caliban instead threw Harlekin into Marauder, his sharp claws sending him back his Amulet. Harlekin was then defeated by Caliban's sword. S2E32

When Tantras was attempting to recruit several orphans for the Blood Spiral, he tested their potential as Seekers. When Harrison Fears summoned Marauder, the other two boys were terrified. Tantras then gave the frightened boys Harlekin Amulets, telling the boys to use their fear to invoke Harlekin. The boys later used their Harlekin Titans to attack Lok and Sophie. After fighting Sorcerel, one Harlekin was defeated by Lok while the other, having defeated Vigilante, was defeated by Powerbonded Caliban. S2E33

In the dreamworld created by Arc, the Legendary Titan of Fate, Lok was attacked by multiple Harlekins after Cherit and all his Amulets turned into the Titan. After a moment of realisation from Eathon Lambert, Lok invoked Pendragon, the Legendary Titan of Champions and together, with the Willblade, defeated the Harlekins and escaped the dream. S2E34

Two Harlekin Titans were invoked by the Casterwill Hunters in the cave of Medusa to rescue Kiel from the Huntik Foundation. They were fought off by Powerbonded Baselaird using his Double Aggression ability before defeating them both. S2E35

Harlekin was invoked on the streets of Venice by the same blue-haired orphan recruit to attack the Huntik team. After a fierce fight against Powerbonded Lindorm, Harlekin was defeated by Lok and Lindorm's Spinnerslash ability. S2E36

Harlekin was invoked by one of Kiel's Silent Soldiers on a clifftop in Mexico. It attacked Dante's Metagolem, but was knocked back by a large root before being punched and defeated. S2E38

Harlekin was invoked alongside Midnight Rook in the Great Rift Valley to attack Dante and Den. After fighting against Dante's Solwing, it was defeated by Den's new Titan, Cursed Archer. S2E39 Numerous Harlekin Titans fought against the Casterwill family and Huntik Foundation during the Spiral siege on the Fortress of Iron Will. Many attacked and were defeated by Templar, the Titan of Lucas Casterwill. S2E40

Harlekin was invoked by a Casterwill Hunter to pursue Lok on the anti-magic island of the Phoenix. However the pair were led right into a trap where they were buried in logs released by Dante's Elf King Oberon. Harlekin, now angry, attempted to escape but was defeated by Oberon. S2E45

During a nightmare, Lok was attacked by numerous Harlekin Titans outside the site of Tír na nÓg. After trying to save his father, Eathon, with the Willblade, Lok fell through a portal in the ground, something which later happened in reality. S2E48

After being overpowered by Den and Powerbonded Vigilante during their final battle, Harrison desperately yelled at Zhalia to invoke her Harlekin Titan to which she responded by invoking Kilthane. Harlekin was later invoked by a Silent Soldier amongst the fierce clash between the Blood Spiral, Casterwill Family and Huntik Foundation factions at the Spiral Mark. S2E51

Harlekin attacks using its sharp claws, and it appears to be fairly strong and fairly agile. Like Marauder, Harlekin draws power on its Seeker's negative emotions, being fuelled by fear. It is also able to jump from place to place quickly.  S2E36

Click here to view the full Gallery for Harlekin 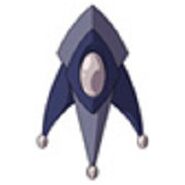 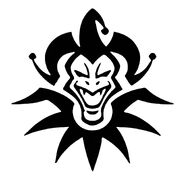 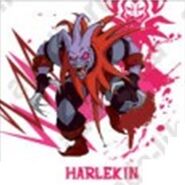 Harlekin
Add a photo to this gallery

Retrieved from "https://huntik.fandom.com/wiki/Harlekin?oldid=75581"
Community content is available under CC-BY-SA unless otherwise noted.