Hoffman is a high-level member of the Organization who served under Wilder and previously under the Professor, himself. Though old, Hoffman is an experienced Seeker with a strong resoluteness.

Hoffman was previously a high ranking official under the Professor and then became first under Wilder. source?

Hoffman was with Wilder and Stack at the South American Forest, Peru. He fought Dante Vale outside the waterfall cave that hid the Nexus but retreated with Wilder when Myrmidon was defeated. S2E27

At Salon Museum, Hoffman defeated Billie, Peter, and a third Huntik operative who was dialing for help. When Dante's team arrived, Hoffman fought against Lok Lambert and Sophie Casterwill but was thrown out of the tower by the enchanted Sentry Triclops Titans. S2E28

Hoffman then was sent to the Chu Goku Mount, Japan, with Eathon the dog to find the Amulet of Divine Mirror Kagami. He took the Amulet to Avalon and fought against Dante, who was turned to stone when Kagami's ability reflected the Stonegaze ability of King Basilisk. When Zhalia Moon reversed the ability and returned Dante to normal, Hoffman retreated with Stack. S2E30

Hoffman, alongside Wilder and Stack, ambushed the Huntik team in Klaus' laboratory. He fought against Lok and Sophie but was defeated through the aid of Cherit before the Organization was ambushed by the Blood Spiral. S2E32

He and Wilder observed Stack attempting to infiltrate the Blood Spiral on Medusa Island. When Dante's team arrived, Hoffman summoned Myrmidon to fight alongside a Suit Venomaster against Dante's Caliban. Meanwhile, Hoffman fought against Sophie and Sabriel but, upon defeat, retreated with Wilder, leaving Stack behind. S2E35

At the vault of Hernán Cortés, Hoffman and Wilder set few new traps for Dante and his team, capturing Den Fears in a Trapcage spell. Hoffman fought Den, Lok, and Sophie but retreated when Dante obtained the Ring of Umbra the Shadow Jaguar, trapping the Huntik Foundation in the cave with Conquistador. S2E42

When the Huntik team went looking for Rassimov's secret files in the Professor's castle, Hoffman and Wilder were at that base. Hoffman and Eathon the dog fought against Dante and Grier but eventually were defeated. Hoffman was left to guard the castle when Grier took Wilder hostage and took control of the Organization. S2E46

As a loyal member of the Organization, Hoffman took orders from his superiors without hesitation. Due to this loyalty, he thoroughly despised traitors. S2E27 Shunning cowardice, he values resolution and determination. S2E30 Due to his strong resolve, Hoffman can be stubborn when it comes to him making up his mind. S2E46 However, unlike the lower Suits, Hoffman can weigh the odds of a confrontation and knows when it is more rational to avoid the direct approach. S2E30 He also is not a believer in superstition. S2E28 Hoffman also is very knowledgeable. S2E42 He is not only loyal to the Organization, he is also loyal to the Professor himself as shown when he took custody of Eathon the dog and when he tried to stop the Huntik Foundation from entering the Professor's castle. S2E30 S2E46

Despite being old, Hoffman is a formidable Seeker. In addition to basic Organization abilities, Hoffman is capable of using the Earthband and Rockforce spells. Among his favored Titans are Doberman and Myrmidon. He also seems to be quite skillful and strong as he was able to hold his own even against a powerful Seeker like Dante Vale. S2E46 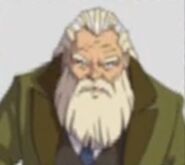 Hoffman and Eathon the dog

Hoffman and Wilder
Community content is available under CC-BY-SA unless otherwise noted.
Advertisement