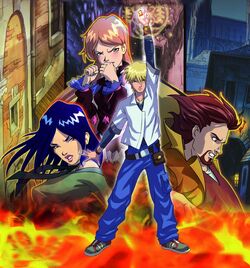 Huntik: Secrets & Seekers is an Italian-based animated series that was created and directed by Iginio Straffi. It was animated by Rainbow S.p.A., a studio co-owned by Straffi and Viacom. Both seasons were co-produced by Rai Fiction and the first was co-produced by Big Bocca Productions. The visual designs, artwork, music, and story writing were all done at Rainbow in Italy while some scriptwriting and voicing were done in the United States. The series is an action-adventure comedy that follows the team of Lok Lambert, Sophie Casterwill, Zhalia Moon, and mentor Dante Vale around the globe in search of ancient Amulets that can summon powerful beings known as Titans in order to battle the forces of evil. The show features a variety of real-world historical locations, and one of Straffi's goals for the show was to give viewers "the opportunity to learn about Italian and European culture."

The first season was initially announced here in 2006 for a broadcast date of early 2008, but it was delayed by a year. It eventually premiered on The CW's CW4Kids block in the United States and on Jetix in the UK, both beginning on 3 January 2009. Following weeks of previews, it premiered in Italy on Rai Due on 12 January 2009. The first season ended in the UK on 29 January, in Italy on 16 February, and in the US on 5 September.

A tie-in Huntik Trading Card Game was released beginning on February 17, 2009, with Secrets and Seekers and concluding with the October 09, 2009, release of Omens and Legacies.

Long before our time, humanity fought against an evil of unimaginable power. The darkness was broken only by the Seekers, humans able to invoke legendary creatures, the Titans, into their own plane of existence. With the Titans executing their every order, the first Seekers fought against the dark forces of the underworld and against themselves. Centuries went by, and one by one, the Titans were hidden; some were buried following grueling battles, while others were merely forgotten as time passed. The magical and powerful creatures lie hidden and dormant in the most remote parts of the universe, waiting to be awoken by a new group of Seekers.

After centuries passed, the Seekers divided themselves into groups in order to find traces and clues of past and extinct populations in order to reveal the mystery of the Titans. One such division, the Huntik Foundation, travels in search of these answers - from the tip of South America to Europe; from North America to the African terrains. Only the most worthy of Seekers are able to invoke the Titans and benefit from their unbelievable powers. But there are those who plot in the shadows: the secretive Organization, led by the Professor, is another division of Seekers and wants to possess the Titans' powers for their own evil plans.

Lok's father, Eathon Lambert, has been missing for ten years, and the only thing Lok has to remember him by is an ancient jar. When that jar is accidentally broken, Lok discovers a journal that discusses the mysterious Titans. The jar also contained an Amulet, although Lok doesn't know what it is at the time. Now Lok is teaming up with The Huntik Foundation to find and bond with Titans before the Professor, DeFoe, Grier, and the rest of the evil Organization use them to take over the world.

Using Eathon Lambert's journal, the team follows a series of clues in an attempt to find Lok's father. However, the search reveals a mysterious connection between Eathon and the Professor as well as clues to uncover the fabled Amulet of Will, which is necessary for awakening Lord Casterwill's Legendary Titans.

With the defeat of the Professor, a new menace has arrived. Rassimov has become stronger, and a new Organization has formed under Wilder. Having trained since their last battle with the Professor, Lok Lambert, Dante Vale, Sophie Casterwill, and Zhalia Moon must now face this new menace. To help with their adventures, a new Seeker, Den Fears, is recruited to face off against the Blood Spiral Brotherhood. In addition to this new member, the power of Powerbonding has been unleashed.

Having discovered Eathon Lambert's Holotome, the Huntik Foundation begins to investigate the Holotome's riddles concerning the prophecies of the ancient Seeker, Nostradamus. The truth about the Casterwill family becomes revealed bit by bit, beginning with the discovery of a legendary sword, the Willblade.