Hydramaskar is a Meso-Titan, with three heads, each donning a bizarre totem-like face which protrude from its draconic body via long serpentine necks. A three-headed relation to the seven-headed Hydra, this Aztec Titan is a formidable opponent.

The ancient Greeks believed in a seven-headed snake-dragon called Hydra, but this Aztec Titan has only three heads. Like the Greek Hydra, it is very dangerous and hard to destroy. Huntik.com

Sophie Casterwill once fought against this Titan and hoped that it didn't possess the Hydra's ability to grow two more heads for each one Hercules cut off. SAS-035

Like his Titan cousin, the seven-headed Hydra of Greek legend, the Hydramaskar of Aztec mythology wields a different power for each head on his body and cannot be destroyed unless each head is neutralized. While the Hydramaskar Titan has only three heads, each packs a very significant and unique punch. Fire bolts, ice rays, and shadow magic are Hydramaskar's primary ranged abilities. He can also enhance his strength and enchant his claws with any magic from his arsenal, transforming the already deadly beast into an unstoppable melee force. Huntik.com 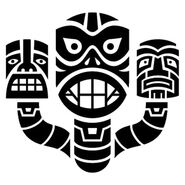 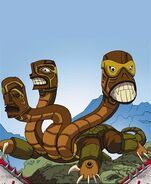