Icarus are humanoid Krono-Titans who possess bird-like wings instead of arms. Icarus Titans are commonly used by Casterwill family members alongside Feyone, and one appears in the arsenal of Sophie Casterwill.

The mythical Greek inventor Daedalus named his son, Icarus, after this flying Titan. Daedalus created artificial wings out of feathers and wax, which he and his son used to escape from the evil King Minos. Huntik.com

A large number of Icarus Titans are under the control of the Casterwill family, and had been assimilated by Legion. S2E47 Icarus Titans were also some of the favored defenders of the Fortress of Iron Will, a Casterwill meeting place. S2E40

Sophie Casterwill invoked her Icarus in Basilisk House to fight against the Organization but he was defeated by Defoe's Kreutalk. S1E09 In Thessalonica, Greece, in the operation to recover the sunken shipwreck, Icarus threaded the rope through the eye of Caliban's dagger. Later, Sophe invoked him to fight the Organization forces but he was defeated by two Suits' Raypulse blasts. S1E10

Sophie later invoked Icarus to escape from a group of Casterwill Hunters who she was leading into an ambush. S2E45

Mallory used his Icarus alongside White's Feyone to attack the Huntik team as they tried to land on the shores of the Crystal Caves. He was defeated by boulder thrown by Dante Vale's Metagolem. S2E29

At least one Icarus from an unknown Seeker had been absorbed by Legion, the Legendary Titan of War. Legion used Icarus' Blinding Bolts ability to attack the Huntik team. S2E47 At the Spiral Mark, Legion again used the ability against Lok and Sophie. However, when Lok shattered Legion's Amulet, Legion was destroyed, and Icarus and the thousands of other absorbed Titans returned to Huntik, the spirit world. S2E50

Icarus is able to fire lightning bolts from his wings, and can generate blue energy spheres as well. He can shoot laser rays from his eyes. His wings allow him flight and he is one of the fastest flying titans. Icarus is able to hold the weight of a human to temporarily allow them flight, even while being silent, making him a deadly foe. S1E18 Icarus's stats are low, but he is a sharpshooter and has fantastic abilities at long range. S1E17 His considerable accuracy means he can thread a needle with ease. S1E10 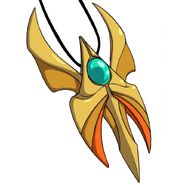 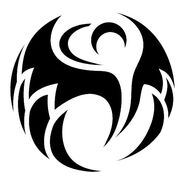