Start a Wiki
Incubane is a demonic Yama-Titan with goat-like horns and feet who is capable of shooting laser beams from its nails. An Incubane Titan is the primary Titan of Wilder.

Incubane was summoned by Wilder to fight Powerbonded Baselaird. When Hoffman used Poisonfang on Lok, both Baselaird and Lok were weakened allowing Incubane to hit Baselaird. This resulted in both Titans being defeated and sent back to their Amulets in combat. S2E28

On Avalon, Wilder used Incubane to attack Lok and Sophie while searching for the Willblade. Incubane was temporarily taken over by Dendras but Wilder used Divine Mirror Kagami to reflect the ability, gaining control over Dendras and releasing Incubane from Lok's control. After a fierce battle with Lok, Incubane was defeated by the Titan of Champions, Pendragon. S2E30

Incubane was invoked by Wilder to fight the Blood Spiral's Silent Soldiers. He attacked Shakrit but it defeated him in a single bite. S2E32

Incubane fought and overpowered Dante's Caliban but his attacks were blocked by Powerbonded Sabriel's Truth Shield ability. He was then abruptly defeated by Cherit. S2E35

Incubane was invoked by Wilder in the Professor's castle to fight Sophie. He set fire to a tapestry in front of Sophie but was defeated by Phoenix. S2E46

Incubane has the ability to shoot laser beams from its nails, mouth or eyes. These beams are very powerful, and are capable of inflicting heavy damage or setting things on fire. S2E46 Incubane can also climb up walls or jump to great heights. S2E30 S2E32 He is also quick due to his goat-like feet. S2E35 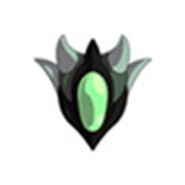 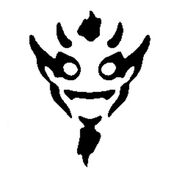 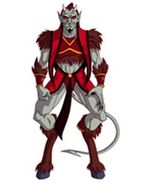 Incubane
Add a photo to this gallery

Retrieved from "https://huntik.fandom.com/wiki/Incubane?oldid=89193"
Community content is available under CC-BY-SA unless otherwise noted.