Jeweled Colossus is a Litho-Titan whose body is covered in armor and in green and purple gems. These gems give his body extra durability in battle.

Lok Lambert once encountered a Jeweled Colossus Titan and remarked that it would be worth a "zillion dollars" if it were not a Titan. SAS-085

Jeweled Colossus' gem-covered body acts as durable yet flexible armor and can also emit magical auras. This light can be altered by using the different gems on his body and can be used to confuse, hypnotize, or scare his enemies. Huntik.com 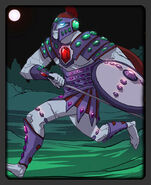