Jokoul are Litho-Titans that resemble devious ice trolls of Nordic regions. These gray-skinned Titans attack through physical combat using their horns and armored claws. As a large stash of Jokoul Amulets was uncovered by Simon Judeau, these Titans are often used by members of the Organization.

In ancient history, Jokoul Titans were very common and sought after, and they were the origin of the mythological Norse winter-elf known as Jökul Frosti. One first-century Seeker, Qwitonn, was obsessed with Jokoul Titans and was known for his collection of their Amulets. After the hermit's death, the Jokoul Titans mysteriously faded from history for 2,000 years. Huntik.com

While working under Grier, Unnamed Suit 020 invoked a Jokoul Titan on Sutos Island when Dante Vale's team was discovered. It fought against Lok Lambert's Freelancer. After Freelancer was defeated, Jokoul was defeated by Lindorm. S1E12 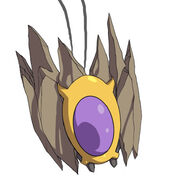 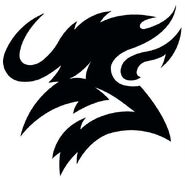 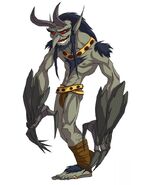 Jokoul
Add a photo to this gallery

Retrieved from "https://huntik.fandom.com/wiki/Jokoul?oldid=77198"
Community content is available under CC-BY-SA unless otherwise noted.