Kiel was a high level member of the Blood Spiral team known as the Casterwill Hunters. Along with his tracker, Marduk, he was responsible for the eradication of numerous Casterwill branches, including the parents of Sophie and Lucas Casterwill, whose home he burnt down. Kiel's choice Titans and spells were typically fire-related, matching his explosive disposition and hot temper. As the most brutal of Tantras' acolytes, Kiel was the only student to ever surpass his master.

Kiel was responsible for the death of Sophie and Lucas Casterwill's parents and for the burning of their house in Paris, France. S2E38

Kiel was sent by Tantras to Medusa's Island to oversee the Organization spy, Stack, in his promise to recover Medusa. They were followed by Zhalia Moon to Medusa's Cave where the Huntik Foundation launched a surprise attack, with Metagolem taking Kiel prisoner and Dendras neautralising Kiel's Titan, Volcana. However, Kiel's tracker, Marduk, and Casterwill Hunters soon arrived, giving Kiel time to defeat Metagolem and attack Sophie Casterwill. Lok was able to recover Medusa and the Huntik team made a swift escape, leaving Kiel to knock Stack unconscious and take him back to Tantras as a prisoner. Sophie, however, became certain she recognized him. S2E35

Kiel later attempted to steal the secrets of the Casterwill family from Focauld Casterwill with the aid of his Ignatius Titan, Marduk, and the Casterwill Hunters. However their assault was interrupted by the arrival of the Huntik team who rescued Focauld and escaped with the Casterwill Crystal containing the family's secrets. S2E37

Kiel and his men later travelled to Mexico to stop the Huntik team from activating the Blue Star to call the Casterwills out of hiding. After an attempt at kidnapping Den Fears, Kiel and his men chased the team to the Temple of Sun where they were held off by Dante Vale. Kiel then overpowered Sophie Casterwill and revealed to her the truth of how he killed her parents. Before he could finish Dante and Sophie, Kiel was forced to retreat after Lok Lambert summoned Quetzalcoatl, the Legendary Titan of Summons. S2E38

During the assault on the Fortress of Iron Will, Kiel led the Casterwill Hunters in an attempt by the Blood Spiral to eradicate every living member of the family at once. After fighting and overpowering Dante Vale, Kiel personally went after Sophie Casterwill, using his Balenpyre and Volcana Titans to do battle. He and his Titans were defeated when Sophie invoked Powerbonded Sorcerel and Mythras, the Legendary Titan of Valor before using Soulburn's power to defeat him and his two invoked Titans. Though Kiel, himself, was defeated, he, on Tantras' orders, managed to invoke his most powerful Titan, Efreet King, before passing out. S2E40

Kiel is a brutal and cruel individual, who gets easily enraged by trifles, as when Stack called him "mister." Kiel's sole goal is to kill the Casterwills. He bursts in anger when someone is stopping him on his way to do so. He doesn't respect his enemies, treating them like a prey. He has no patience, as evidenced by his claim that they would find the Casterwill secrets easily among the pieces of the Library after they had torn it down, and his interruption of Focauld Casterwill. He is in a word, a pyromaniac.

Raised to destroy the Casterwill family, Kiel is an extremely powerful warrior and the most brutal student of Tantras, being the only one to ever surpass his master. He is also able to hold Dante Vale in fight. Kiel relies solely on fire-based Titans, most notably his signature Titan, Volcana. His powers are also predominantly fire-related, favoring the likes of Armorburn to cover himself in flames or Fireswarm to fire direct bursts of flames. 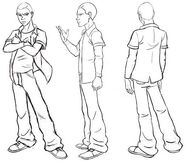 Kiel and his master, Tantras

Kiel and Balenpyre
Add a photo to this gallery