Klaus was an evil professor who found Zhalia Moon in the slums of Amsterdam as a child and raised her to be a spy for the Organization. He is a scientist and alchemist known for his magical technology, enhanced spells, and experimental Titans.

Klaus adopted a young and orphaned Zhalia Moon, taking her off of the streets and into his care treating her like he would to his own daughter. Under his guidance, Zhalia was made into a top Organization spy. source?

After Grier left the Organization, Klaus took over on missions to recover powerful Titans. Klaus was much smarter than DeFoe, becoming one of the strongest opponents the Huntik Foundation team had encountered at the time. source?

Klaus was visited by Rassimov and was asked by the Organization to destroy the Huntik team. Klaus then sent his suits to ambush Dante Vale and the team in the New Grange Passage Tomb. To do so, he gave Zhalia the deadly Deadcalm, but she instead used it to help the team escape after they found the Titan Gybolg. After a short battle, Klaus' Suits were defeated. S1E13

In the Tomb of Nefertiti, Klaus and his Suits ambushed Dante, Zhalia, Lok, Sophie, and Cherit at a waterfall in the tomb. Klaus then ordered his men to bombard the team, but Dante managed to escape with his team through the waterfall but by giving up the Sceptre of Nefertiti. after one of Klaus' suits find it in the water it is revealed by Dante that he placed a tracking device on the sceptre so that he can follow Klaus to his base. S1E15

Klaus returned to Vienna to his bookshop but was followed by Dante and his team. Later, Klaus was informed by Zhalia that Dante was after the Bottle of Djinn. Trying to keep it safe, Klaus took the bottle with him, leaving the Spear of Vlad the Impaler unprotected. When Dante arrived at Klaus' vault room, the two battle each other. After a long fight, Klaus became enraged when he found out that he was tricked into guarding the wrong artifact and that Dante had acquired the spear. Due to this ploy, Klaus called Zhalia and told her that not only Dante but now the whole team needed to be eliminated. S1E16

Instructed by the Professor to acquire the Amulets of Vlad Dracul, Klaus proceeded to the Castle of Vlad Dracul, using the Neverlost spell that he learned from the Sceptre of Nefertiti to arrive before Dante's team. Intending to end Dante's team, Klaus powered up his men with Overmode. He also ordered Zhalia to kill Lok and Sophie on her own and to proceed to help kill Dante. When Zhalia hesitated to do so, Dante recovered enough to attack Klaus again but again was defeated. Klaus, however, was interrupted by Zhalia, who turned Klaus to stone with King Basilisk. S1E17

Klaus was later returned to normal by Zhalia in order to reveal to the Huntik team where Void was hidden, after which he again was taken into custody by the Huntik Foundation. Before leaving, Klaus asked Zhalia to come and visit him. S2E32

Klaus was a maniacal and eccentric old scientist with a taste for the darker side of life. He had a habit of collecting odd, old, and dark souvenirs from his travels, keeping them in an organized fashion. While he would personally try to protect these possessions from being stolen, he had no qualms with destroying them as a last resort and keeping the secrets they held to himself.

Klaus took great pride in his intellect, holding a grudge against Dante Vale for outsmarting him, to the point of Klaus ordering his entire team's destruction. Klaus had great knowledge about the secrets of the Legendary Titans, which he planned to use for his own agendas. His knowledge is to the extent that Zhalia thought that he might know about Void.

Klaus' usage of science was usually unethical and included dissecting and testing upon humans as a hobby. Many of his dark and sinister artifacts were used in order to create deadly weapons which were a combination of technology and magic. When he felt he had exhausted an artifact or document's potential use, he was more likely to destroy it than to preserve it for historical purposes.

Klaus kept his own goals a secret shrouded in mystery, even keeping them from his superiors within the Organization through lying and deception. When his plans were interfered with, he would stop at nothing to destroy his nemeses.

Though he was very manipulating and cruel, he still did care about his adopted daughter, Zhalia Moon, whom he took off of the street. He even admitted that he truly thought of Zhalia as his daughter before he was turned into stone by King Basilisk, even asking her if she would visit him before his being taken away to jail by the Huntik Foundation.

Klaus was a talented, brilliant, and evil Seeker. He is also an incredible scientist, developing and studying spells and artifacts, respectively. Klaus was a good researcher and inventor, but he had no sense of history, being more than willing to destroy any artifacts that he no longer needed. Although he tended to prefer cunning experimental tricks over physical combat, he was capable of overpowering Dante Vale one on one. His primary Titan was the powerful Brahe. 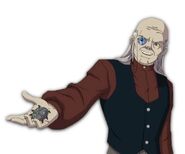 Klaus as a young man 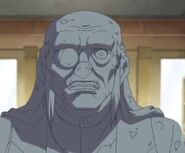 Klaus turned into stone
Add a photo to this gallery

Retrieved from "https://huntik.fandom.com/wiki/Klaus?oldid=90072"
Community content is available under CC-BY-SA unless otherwise noted.