Kreutalk is a Swara-Titan that looks like a flying manta ray with the venom of a cobra. Although manta rays are curious, and usually peaceful creatures, Kreutalk is cruel, aggressive and unpredictable.  It can spit acid strong enough to dissolve metal. Kreutalk is a fairly unusual Titan, with very few copies known to exist in the modern world.

DeFoe invoked Kreutalk in the Venice Huntik Library alongside Grier's Breaker. Kreutalk then fought with Shinobi but failed to defeat him. S1E02

Kreutalk again was summoned and was ordered by DeFoe to retrieve the Jodis Lore's Key, after which DeFoe and Grier headed to the Golem's Attic. S1E03

DeFoe later used Kreutalk's acid to clear a path in the catacombs, blocked with stones thanks to Zhalia Moon, in order to pursue the Ring of Arc. Kreutalk also was used to attack Kilthane, but Kilthane and Dante Vale's Caliban forced the Organization's forces to retreat. S1E06

Kreutalk again was invoked to stop Dante's team from getting the Titan, King Basilisk. Kreutalk then took out Solwing and Icarus and weakened Sabriel and Freelancer for Gar-Ghoul to defeat. However, as Zhalia reached King Basilisk first, the Organization forces were forced to retreat at the threat of being turned to stone. S1E09

After DeFoe's was defeat at the hands of the Huntik team, all of his Amulets except Gar-Ghoul, were sent to a Huntik Foundation safe house. His Kreutalk Amulet remained there since. S1E10

A frightening sight to see, Kreutalk has the head of a cobra and floats, flies, or hovers, with the power of his serpentine hood which functions as a pair of wings. He is able to spit acidic venom at enemies, and he can use this magical poison to dissolve locks, burn holes through doors, and destroy incriminating evidence. Also due to his large eyes, he seems to have excellent vision.

Kreutalk was initially designed after a flying manta but was later given more extraterrestrial traits such as extra eyes, arms, and the ability to spit acid. His final design was thought to invoke the feel of Dracula. Huntik.com 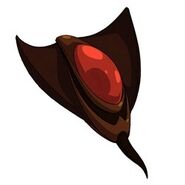 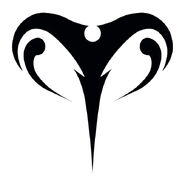 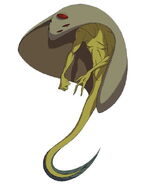