Kronos is the Legendary Titan of Time. A hooded figure in the visage of the Grim Reaper, Kronos dons purple and gold armor and wields a large scythe. He is used by Dr. Benway.

Dr. Benway and the Professor fought each other for ownership of the Ring of Kronos. Although the Professor used Araknos to put Benway in a wheelchair for good, Benway claimed the Ring. Later on, Benway used Kronos in a battle with the Huntik team. Kronos sent Lok and Sophie back in time to the seventeenth century. HC#17

Kronos is able to send people though time. His sharp and perfectly aimed scythe is unable to be stopped by swords or shields. 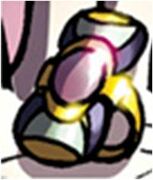 Kronos
Add a photo to this gallery

Retrieved from "https://huntik.fandom.com/wiki/Kronos?oldid=79636"
Community content is available under CC-BY-SA unless otherwise noted.